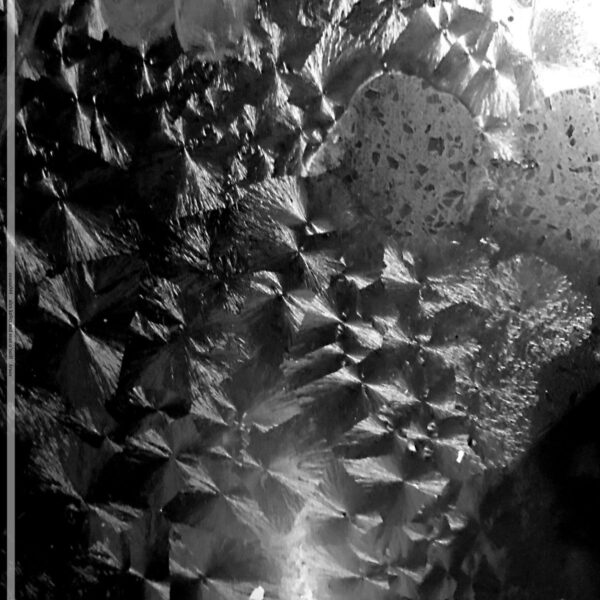 Alex Keller is the Texan sound artist who started quite a riot here at TSP mansions in 2016 with his Black Out solo record, for me a significant benchmark showing us just what you can do with sub-bass tones resonating in an enclosed space. Bones were rattled in direct violation of all we hold dear. It projected a degree of intensity which is hard to come by. Getting much the same delicious vibe from today’s slab of transparent vinyl, the LP Kruos (ELEVATOR BATH eeaoa46) which Keller realised as a duo piece with Sean O’Neill. O’Neill incidentally had a piece on the Phonography Austin Volume 1 comp which Keller sent us in 2017.

On one level Kruos fits nicely into the Elevator Bath mode – it’s fair they say they love a good droner at this label, and you don’t get much dronier than this item. On another level it’s doing what so many sound artists are doing these days, combining field recordings with electronic music in some way (in this case magnetic oscillators and old telephony equipment), such that this LP would fit right at home with any given Jim Haynes experiment released in the last year or so. There’s a few things that make Kruos pretty special though. To begin with there’s a simple structure to the album – side one is “indoors”, side two is “outdoors”, and there’s a plan to move the listener bodily from one place to another. We start off with facing very enclosed claustrophobic humming reverberators in a space where you can almost see the brick wall of a basement, so vivid are the recordings. This reflects the university power plant where some of it was captured (and who among us has not dreamed of harnessing the mysterious hum of a magnetic coil).

Then on the flip we’re out in a public park space with birdsong and open-air sound captures. In both cases the addition of electronic drones serves to create some truly mesmerising moments, yet the spell is constantly at risk of being broken by interruptions from the real world. Me, I would have been happy staying in the company of the power plant for the whole 35 mins (the LP opens with a chest-crushing sub-bass tone as striking as any moment on Black Out), but I dig the conceptual narrative thing that’s a big part of this team-up. There’s also some wordplay involved in the Kruos name, something to do with this Greek word being the root of the word “crystal” and a belief, apparently not unknown in the ancient world, that crystals were formed by extreme cold. The idea of “freezing” time evidently appealed to Keller and O’Neill, but they’ve relinquished the idea of controlling time and space through over-manipulated field recordings in favour of this much more direct approach of theirs.

Which brings me to another strong point of this Kruos, that is its very natural and organic feel which I count as a boon. Some phonographers are keen on adding a slightly mystical patina to their work, for instance through editing, juxtaposition, or transforming sound; in so doing they’re perhaps editorialising about the world, wanting these recordings of the rain or the ocean to somehow mean more than they do. It could be a European trend; López could stand accused of doing it, for one. By contrast, Kruos is more convincing as a level-headed long hard look at reality, largely unvarnished save for these electronic interventions. Fine piece of work. From 16th June 2017.