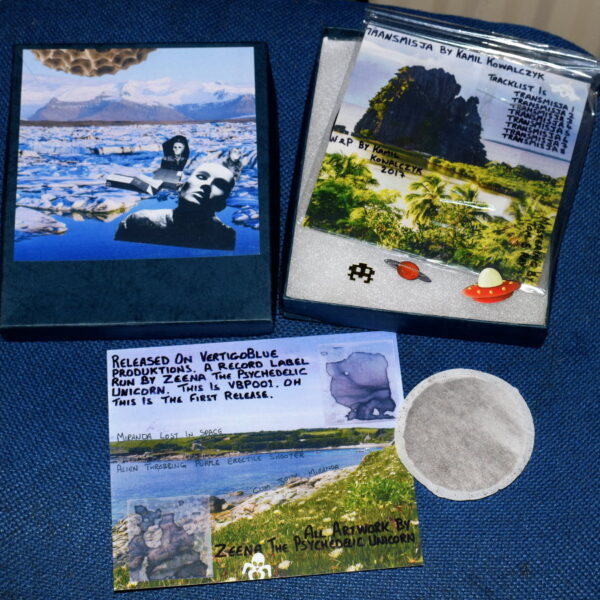 Transmisja is I think the third record we’ve heard from Kamil Kowalczyk, the young Polish composer who works with mesmerising electronic drone in a very single-minded fashion. The previous two albums were Aurora and Nova, both of them released on his own Prototyp Productions label and carrying sleeve art that made plain his intent to explore the far reaches of the galaxy with his drones. Transmisja (VBP001) however is released on VertigoBlue Produktions, in fact the first release on this new label which is run by a lady who answers to the name of Zeena The Psychedelic Unicorn. She’s currently based in Edinburgh (where this arrived from) but may be of Polish extraction.

Zeena has put her visual stamp all over this boxed release, with the cover collage depicting aliens of cyborgs adrift in a sea of ice while a menacing flying saucer looms overhead, and her hand-written annotations on the inserts referring to “Miranda Lost In Space” and “Alien Throbbing Purple Erectile Tissue”. Her final touch was to insert metallic stickers of a Space Invader, a flying saucer, an image of Saturn with its rings, and a teabag. I mention all this to indicate a dramatic change in the way in which Kamil Kowalczyk’s music is presented; Zeena clearly has her own rather playful ideas about how to convey the mysteries of outer space. As to the music, we have another eight tracks of Kowalczyk’s characteristic subdued oscillating noise, which may appear incredibly simple and unchallenging, but I find remarkably compelling. This might be due to the slightly coarse nature of the generated tones, which imply he’s still wedded to old-school analogue technique and eschews smooth digital surfaces. It might equally be the focus and concentration with which he creates each episode, barely wavering from the original intention. We get a pleasing rise-and-fall crescendo effect which I assume is common to anyone who knows how to control an oscillator or tone generator, and this is sufficient to propel each piece from start to finish.

On this occasion, there’s also a certain anonymity which I like; I’ve noted before how this fellow’s music seems to wrap us up, to close us off from the world, the better in this case to concentrate on the content of these “transmissions”. Come to that, “transmissions” is a very loaded term; I can speculate on how other similar creators would treat the theme, if they were driven to it. For instance, S.E.T.I. would make no secret of his interest in intercepting messages beamed from outer space, and the content of the music would approximate those messages, perhaps using distorted voices, shortwave radio effects, or patterns resembling morse code. Simon Belastrazzi, if commissioned with such a theme, would alight on one of his preferred topics and open a séance in an attempt to receive transmitted messages from the dead, or from unknown occult zones. Disinformation would have tuned his powerful receiving equipment towards the capture of radio transmissions from the sun, and present these sounds as a form of scientific data, disguised as ambient music.

What’s interesting about Kowalczyk is that he does none of the above, and his “transmissions” are largely empty of anything resembling “content”. It’s as though what we’re hearing is a record of the action of transmission, or rather a ghostly trace of the event. We sit there watching an impassive alien pilot on board his inter-galactic craft, seated behind a control panel and apparently sending or receiving transmissions, but we have no idea what any of them mean, and we can’t understand the advanced equipment he’s using to do it. Encryption of the highest order. From 10th July 2017.