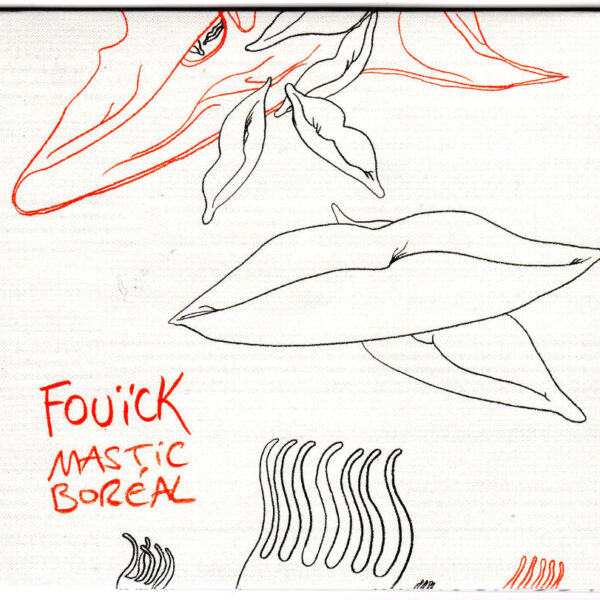 Part two of our survey of recent releases from Fou Records. Highly unusual entry on the label is Mastic Boréal (FR – CD 22) by Fouïck. This project pairs Jean-Marc Foussat’s synth burbling with the recits, vocalising and ranting of Blick, a fellow who is given the very precise French credit of imprécateur (more or less untranslatable into English), and together they produce a unique words-and-music tour de force. All the words are in French, but this need not present a language barrier problem to us English speakers; firstly there’s plenty of emotional shape-throwing clearly audible in Blick’s impassioned performances, a quality which transcends language, and secondly I get the impression that Blick is something of a punster and an absurdist, playing with the sounds of words in his mouth as much as he fractures meaning and common sense with his eccentric hand-written text layouts, examples of which appear in the enclosed booklet. There may be resonances between Blick and well-established sound poets of France, such as Henri Chopin or François Dufrêne, although unlike them his work is not completely abstract, and he’s still very attached to old-fashioned things like nouns and verbs, used to convey meanings. As to Foussat, all his AKS synth work is completely improvised (he adds voice too on occasion) and he makes his electronic puppy jump through hoops, emitting plenty of wild whoops and squeals along with his sinister growls and murmurs. I suppose one precedent for voice and electronic music in a fine art setting would be the John Cage thing with David Tudor (Indeterminacy) that was released on Folkways in a box, but that’s a bit like being read a lecture with wild noise irruptions fracturing the meaning of the words. Fouïck is more akin to poetry and music and as such it’s not too far away from a Sun Ra declamation paired with a Sun Ra moog solo. Very good. Further voice work on our next item which teams up two veterans of free improv. FR-CD 24 is a pairing of Joëlle Léandre and her contrebasse with the voice of English grunter, Phil Minton. Inside the CD is a printed text by Tristan Tzara, an extract from his L’Homme Approximatif, which may be Jean-Marc Foussat’s way of editorialising slightly by comparing the free-form vocalising of Phil Minton to the performances of nonsense verse by Hugo Ball and Tzara. Or it may be that the short extract from Chant VI corresponds in some way to the process of interiorisation that I assume is so necessary for a man like Minton to generate his uncanny billows and puffs of mangled mouth-music. By this time in his literary career (I think about 1926 onwards) Tzara was reaching for weird metaphors by the handful, and there’s enough mixed imagery in these dozen or so lines to inspire a thousand paintings by Delvaux, Magritte, and Ernst. Meanwhile Léandre and Minton manage to sustain their duo work for over 31 minutes on ‘Si, lence’, creating something remarkably strange and beautiful-ugly through all-acoustic methods, encompassing song as much as it does noise and free-form playing. It keeps changing direction as often as Proteus…they even sing a duo at one point, a short ritornello from an imaginary opera. Drama, moment, dynamics. The bass sighs, saws, plucks, and supports the singer as he passes through a hundred mutating emotional states, sometimes exhibiting pain and fear, sometimes producing near-comic effects. Not just the voice; the throat, the lungs, the diaphragm, all come into play, and the singing can turn into a wheeze, a sneeze, and a juiced-up saliva fest at any moment. Then he’ll trill a jazz lullaby with as much detail and sensitivity as Robert Wyatt approximating a Charlie Parker solo, or set you puzzling over the meaning of an anecdote spoken in a non-existent strain of Eskimo language. Two other pieces on the CD, ‘Is’ and ‘Blu, ish’ (together the tracks form a sentence), also good, but this long main piece is the most impressive in terms of sustained energy, variety, and creative endeavour.