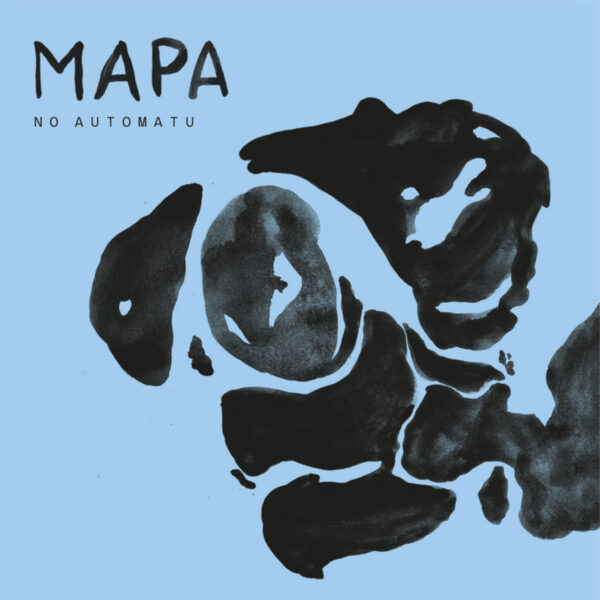 Last heard from the excellent Paul Wirkus, one of a number of severity-meisters based in Cologne, with his superb solo release Discours Amoureux. He’s here today as one half of Mapa, a duo whose other performer is the Polish guitarist and experimenter Marcin Dymiter (he used to play with Ewa Braun in the 1990s and is also known as Emiter). As Mapa, these two charmers have only made one release – the 1998 album Fudo which came out in Poland and differs from today’s item, I think, largely because conventional guitars and bass were admissible to the formula. Today, it’s all synths for this electronic-pair, who have undergone extensive surgery to their torsos and heads to accommodate all the circuitry and cabling needed for the job.

Since the whole world is now engaged on a search for the perfect combination of electronics and percussion, we need look no further as No Automatu (GUSSTAFF RECORDS GRAM1705) not only fits the bill, it pretty much defines the template for the next 20 years of research. I say percussion, but I think all the “beats” here are provided by drum machines and sequencers, but no matter – the main thing is that these rhythms are something you could set your watch to and are officially endorsed for that purpose by the King of Geneva, home of precision watches. Wirkus, being something of a percussion specialist I believe, evidently knows what he’s doing when it comes to delivering crisp, no-nonsense snare fills and other rodomontades. Many believe that Kraftwerk and their percussion pads have said all that needs to be said on the subject, but take a listen to Mapa before you seal the deal on that debate, brother.

Of course No Automatu has a rather sinister caste to it, quite some way from the joys of the dancefloor or disco; its stern and vaguely authoritarian clipped tones may be one reason I’m digging it on today’s spin. It’s not laced with menace, but you feel you’d better not step out of line while its grooves are in motion, or faceless soldiers may appear at any moment through the door to issue a corrective discipline of some sort. Secondly, No Automatu is almost entirely free from imagery and other such associations; granted, the titles (in Polish) may translate into grand themes such as ‘Bunt Tragiczny’ which means ‘The Great Rebellion’, but that’s an abstraction more than anything; I mean they are not trying to paint “pictures” in sound or anything soppy like that, and the music insists on its own reality.

The press notes tells us their work combines a large number of genres – including punk, post-punk, hip-hop, and even avant-garde jazz with an interest in electro-acoustic composition. I can just about make out some of these elements, I guess; the title track is a nice little growler which might have found its way onto a 1979 post-punk debut album, assuming its members owned a drum machine and a very impolite fuzzbox. But I can’t really swallow the “avant-garde jazz” claim, a genre of music which is much more open-ended with its pulses and rhythms – indeed its best players worked to break down the tyranny of the 4/4 beat, something which Mapa conversely accept as a given. Heck, they actively affirm it as one of the Ten Commandments of music, written into the Constitution as a truth which they hold to be self-evident. Nevertheless, this credo of their has stood them in good stead, as you will hear when you enjoy these pared-down, no-nonsense slices of concision, precision, and groovy compactness. One for your next house party, assuming all your guests are geeky scientists and alienated existentialists who don’t really like dancing. Available on vinyl and CD. From 16th August 2017.