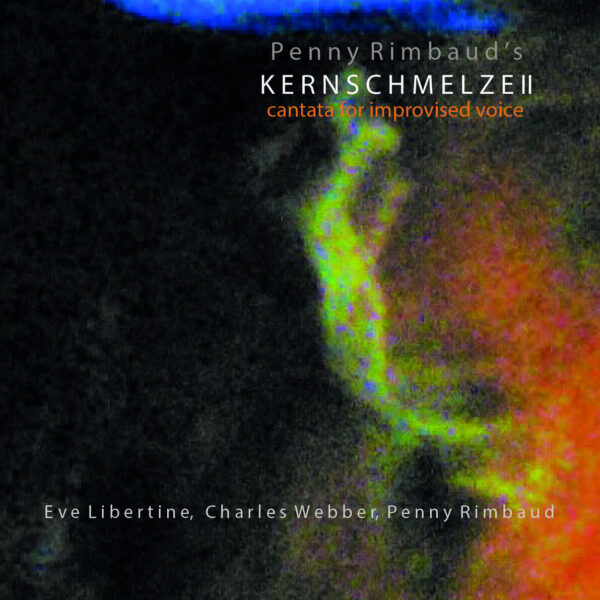 Nutsoid avant-opera noise record from Penny Rimbaud arrives in the form of Kernschmelze II (COLD SPRING RECORDS CSR239CD), subtitled a “cantata for improvised voice”…Eve Libertine and Charles Webber join Rimbaud for this composition of his, with its German title using a word usually reserved to describe a nuclear meltdown, such as that which took place at Chernobyl, and it’s marketed to us as something to do with “the dying gasps of the Age of Enlightenment”. Nothing too ponderous so far, then! Actually a release like this makes perfect sense as the members of Crass were I gather extremely intelligent and cultured people who happened to be highly motivated to change society radically, with their vegan ways, angry anti-nuclear stance, provocative polemic, and anti-authoritarian attitudes, all reflected in the reams of sententious printed literature which used to be included in Crass LP and boxed set releases. The average punk consumer of one of these anti-products in the later 1970s and early 1980s might have thought they were buying an LP of angry guitar songs sung in Thames estuary accents (which they got, to some extent), but they also got armfuls of propaganda they could read and use to warp their brains while the noise was blasting out over the old Sharp music centre. Not to mention the amazing collage art and paintings of Gee Vaucher…

I’ve never been able to substantiate the story, but I heard anecdotally that Crass were also very much aware of classical avant-garde music and used to spin records by Penderecki while relaxing in their collective farmhouse residency in Essex, or wherever it was they foregathered. The notion that Crass might be secret avant-gardists clicked for me when I gave a good listen to Yes Sir I Will (from 1983), which struck me as a powerful tape composition worthy of any student of IRCAM, that is once you’d got through the strident layers of polemic being shouted at you by the massed Crass vocalists. I’m also prepared to believe this theory based on what we hear in the grooves of Kernschmelze II, which has encoded within its music all the gloom and pessimism of Penderecki, everyone’s favourite disconsolate composing Pole. His misery was directed at grand themes, like Hiroshima, Auschwitz, or the Crucifixion; the targets of Penny Rimbaud’s considered misery are less clear-cut, and the individual index points on the CD are untitled, but the listener will undoubtedly carry away a palpable sense that the world is in a massively sick and perturbed state after listening to this weirdie. In this respect at least, it’s not too far apart from some of the depressing and stern records that used to be carried in the Recommended Records catalogue, releases from troubled political states by downtrodden musicians expressing hopeless plights in the form of dissonant songs or discordant compositions. This incidentally tended to reflect on label owner Chris Cutler’s Marxist inclinations, but the music was often strong and important. Another 20th-century composer we might invoke when hearing Rimbaud’s suite is Ligeti; whether by luck or accident, there are tones and clusters here which we can only describe as “micro-tonal”, and could plausibly be lined up in a chain which includes not just Ligeti, but also Dumitrescu. Not bad company to be keeping, so far.

However, Kernschmelze II is pretty much an electronic / electro-acoustic piece fundamentally, one which makes heavy use of processed voice. This basic approach has been in place since the origins of the work in 2005, when he composed the first iteration to accompany performances of his poem ‘In The Beginning’. I never read this poetical statement, but it’s probably safe to assume that it does not include a favourable view of organised religion, even if the first words of the Bible are invoked. From the get-go it seems his basic building block for compositional purposes were sounds generated vocally, then subjected to much transformation. The work went through further iterations and manifestations in 2013 and 2014; along the way he picked up collaborators Charles Webber, an electronic composer in his own right, who supplied the treated piano music for the present release; and Eve Libertine, one of the original singers in Crass. Her poem ‘Cage’ now forms the heart of the composition, and though we hear a version of it at the beginning, those are the last intelligible words you’ll hear as the cantata unfolds. The remaining reams of droning layered abstraction contain a good deal of her vocal improvisations, processed by Webber into a virtual chorus, and dove-tailing with the original vocal-sourced materials. As methods go, it’s extremely contemporary and every bit as labour-intensive as scoring for a string orchestra; I’d like to think Ligeti and others would not be averse to the sample-based composition method if he were alive today, when the results are as rich as this.

Might I add that Kernschmelze II is not simply a successful piece of process and composition; it’s also quite unique, very distinctive, and hauntingly beautiful to boot, equipped with a stern core of strength behind every moment of its eerie drones. One of the more unusual entries in the Cold Spring catalogue. From 10th August 2017.