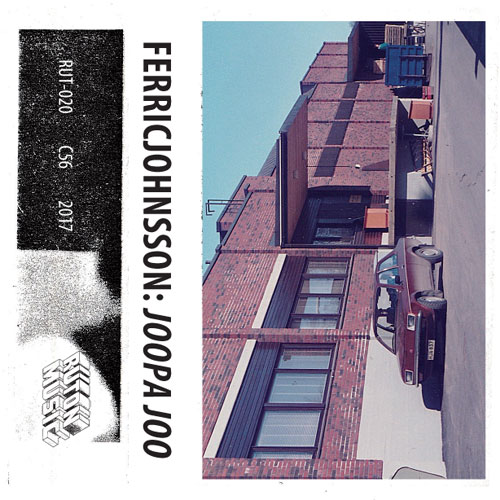 Ferricjohnsson is an alias for Pietari Koskinen, who used to play in the Swissair collective, a combo that included Anton Nikkilä and others; I never heard their music, but there were a number of releases on the N & B Research Digest label, that joint Finnish-Russian publishing concern run by Nikkilä and his friend Alexei Borisov. In the early to mid-1980s, Koskinen made some home DIY solo recordings and released them as cassettes with hand-made covers, thus joining the worldwide small-press outburst of energy whose ripples across musical culture are still being felt today.

Today’s cassette Joopla Joo (RUTON MUSIC RUT-020) was recorded in 1985, now remastered in 2017, and contains 16 songs from this fertile period in Koskinen’s creative career, when he was still a disaffected 20-something with his sideways observations about the trivia of life. I might want to mention that the songs, and their titles, are all in Finnish – so as an English speaker I’m unable to offer any insights as to the penetrating truths of Koskinen’s lyrical nuggets. Helpfully the press notes indicate they are about “bizarre details of…various situations…[such as] the seawater being too salty.”

He plays keyboards, guitars, drum machines, and sings; I suppose with some imagination one could hear a home-made version of what passed for commercial electro-pop in 1985, such as hits like ‘Take On Me’ by A-Ha. For some reason that’s the only one I can think of right now. However, Koskinen eschews the upbeat shiny optimism of the dancefloor in favour of something much more endearingly clunky and slightly forlorn. Those wobbly synth solos and ploddy beats of his really reach the listener in a way which commercial producers simply wouldn’t understand. His singing may appear a tad lugubrious, but at least it’s honest and heartfelt, unadorned by studio effects like echo or reverb, and the overall effect is like one of Robert Wyatt’s solo LPs from this time, such as Old Rottenhat. Nice. From 12th June 2017.