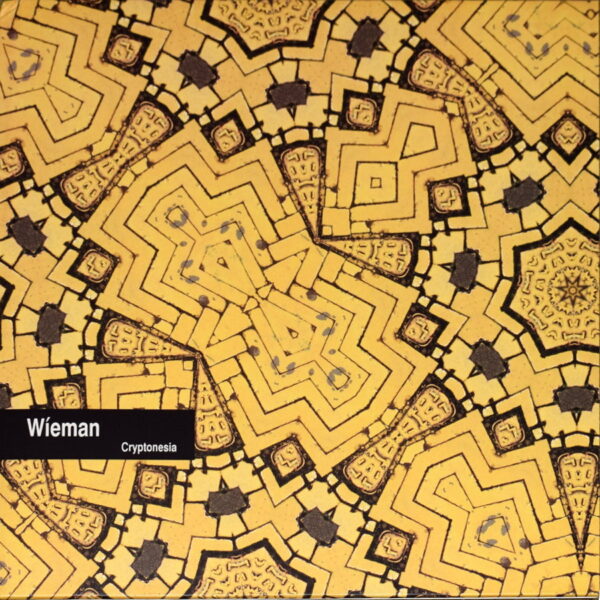 Wíeman is the team of two Dutch veterans, Roel Meelkop and Frans de Waard, whose unceasing activity in the multiple areas of electronic music, performance, and field recording brings new meaning to the word “prolific”. Brave the one who attempts to catalogue their output. They’ve only made four or five records under this Wíeman guise, and this particular release makes use of samples. I tend to associate de Waard especially with these very elaborate “recycling” projects, which go further than just remixing or sampling and end up as radical reconstructions of the source, on a scale which feels more like land reclamation or intensive cardboard recycling. Which isn’t to say Frans de Waard is a big vat full of mulched paper, but he does his bit for the musical culture by putting things together in a new way. Perhaps it’s more accurate to suggest that he and Roel Meelkop see the whole world as Lego bricks, and there’s no helicopter or ambulance which can’t be rebuilt as a lake full of traffic cops with shiny tropical fish.

The record before us today is called Cryptonesia (ini.itu #1501) and the source material is two cassette tapes by Cybe. I never before heard Cybe (real name Siebe Baarda), but this is excusable given that he only made three cassettes in the 1980s before dropping off the radar. One of these, Cybernetika from 1982, is quite a tasty set of electronic synthpop melodies judging by the tracks you can hear hosted on YouTube; I mean he’s not averse to a poppy beat and a snappy rubbery bassline to support his clean tunes and bold analogue warbles.

In sampling Cybe’s work, Wíeman have certainly rebuilt it to an extreme degree (see Lego analogy above; is it too late to change that to lumps of coloured Play-Dough?), and somehow ended up with something that disposes with all the enjoyable parts of the original – Cryptonesia seems uncertain, hesitant, pulling in at least three directions at once. I won’t say the beats have been taken away, but they’ve been rethought as something much more ambiguous, surfacing into the mix when you least expect it. Cybe’s original clean tones have given way to opaque, murky surfaces; it seems Wíeman can’t help dipping their paintbrushes into the colour-box for just one more additional layer. The strong patterns and loops of Cybe have been replaced by weak, mouldy textures.

Even so, there are moments on Cryptonesia which communicate a profound sense of ambiguity and confusion, as though the world of 2014 (when this was made) is nothing like the glory days of 1982 when life seemed simple and a man could skate freely down the uncluttered streets wearing a Walkman listening to A Flock Of Seagulls. Now people not only skate, they also skateboard and jog down the already over-crowded pavements, often doing all three at once, brushing citizens aside while making a jumbled statement about personal fitness and “street” culture. Another one of the final batch of ini.itu releases; the cover, credited to S/, might be an aerial view of an interesting pavement forming kaleidoscopic patterns. Evidently, this label had ambitions to be the Belgian equivalent of Touch. From 8th May 2017.