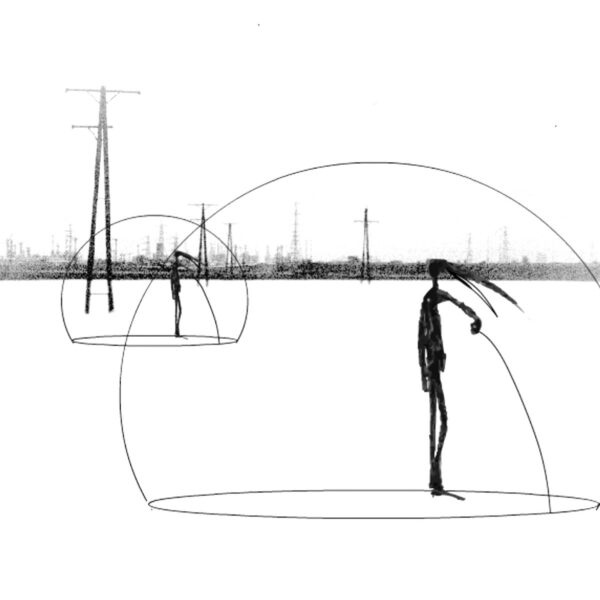 Linear Obsessional is the consistently excellent London-based label run by Richard Sanderson. Sanderson himself is not on this release, but there are several items in the Linear Obsessional catalogue that feature his unorthodox improvisational approach to melodeon which I urge you to investigate. The package is beautifully designed, with a drawing on the front cover depicting figures in their own personal bubbles with a background of an industrial landscape. There is a photographic montage of an industrial smokestack placed three times across the inside of the sleeve in black and white, bulging ever-more clouds noxious fumes into the air. The Black Path is subtitled “sounds from the exhibition at The House Of Blah Blah” which suggests it has been produced as documentation of a multi-media event at said gallery.

The first piece is a recording of Chris Stewart performing his spoken word piece “Transporter Isometrics” with a discreet yet disquieting electronic accompaniment provided by Soiled. Stewart catalogues his environs while Soiled weave ectoplasmic hums. “…let them keep the libraries and museums; hang their education…” Stewart intones; “…this town is not about art galleries and libraries; the culture of this town is about iron and steel…” Soiled, also known as Marcus H, then contributes three tracks of concrét-inspired electronics “Dust Impressions” and “Knitting Scoria Bricks”, although “Navigation To Connals Bed” has a more space-rock flavour in the use of vaguely trippy synth pulses and arpeggios. After this is more poetry, this time another version of “Transporter Isometrics” from Ammonites, a duo of Chris Whitehead and Chris Corner. Multiple voices read the poem. They end on a high – a noisy drum and keyboard attack as if engaged in the construction of some new municipal structure. The final – and longest – piece “Trace Track Trail Tread”, is by Phil Davies and Marcus H as Warped Frequencies. Warped Frequencies are a guitar and drum duo in a sparse and spacey style; skirting around the prog-jazz area, the guitar enriched by liberal amounts of effects. It begins with a delicate guitar riff, in a skeletal style, before developing a more aggressive approach with pitch shifters at work resulting in a stew that momentarily put me in mind of a particularly exhausted Lightning Bolt. The chord-work is looped here and there it seems and treated to an overlaid melody line, what sounds like two notes repeated on a thumb-piano.

This recording of the duo covers a lot of ground but, like the other recordings, is fairly lo-fi. My initial feeling was that at over 20 minutes I might question the decision to include it in this long, presumably unedited form, if only in terms of balance with the other four pieces on the disc, two of which are very short – under three minutes. But on the other hand, this disc is intended a document of a live event so perhaps I am being unfair. After repeated listens however, I found the mix of extreme durations strangely satisfying. It also allows for surprising developments. At 19 minutes, the mood changes and amid a chaotic buzz-fest from the guitar, funky jazz drums produce something that wouldn’t seem out of place on a Ninja-Tune compilation.