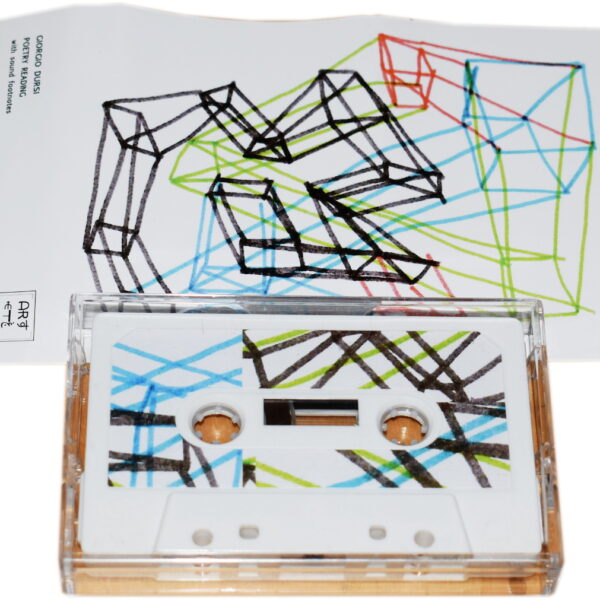 Curio of the day from an Italian performer Giorgio Dursi, who has made a tape called Poetry Reading With Sound Footnotes for the net label ArteTetra. It consists mostly of nonsensical vocal sounds and crazy percussion, assembled in a fairly scrambled fashion to disrupt any logical thinking…zero concessions made to normal listening pleasure. Dursi clearly values such things as linguistic “mistakes” and other infelicities – mumbling, muttering, and stuttering all feature extensively, along with non-lingual grunts and groans of all stripe. This concern with random nonsense extends to the percussive elements, and indeed the entire assembly of this jeu d’esprit, as evidenced by the interest in overlaying two or more non-matching sequences on top of each other. In spirit, this isn’t too far away from the work of fellow Italian Ezio Piermattei and some of the far-out releases on his Tutore Burlato label, although I’m finding Giorgio Dursi far less interesting and not as committed to the fun-loving Dadaist tendency as he might suppose himself to be. His work is bolstered by much pseudo-intellectual jargon in the enclosed press note – “calembouristic vocalizations” being one of the more memorable neologisms…but he seems to want to have it both ways, simultaneously celebrating his “colourful and shapeless universe” while also trying to persuade us that he’s inventing a “complex new world with its own specific language”. Ultimately there’s something about his rather smarmy tone on the tape that I found untrustworthy, but don’t let that put you off investigating this logorrheic fellow, to see if you can discern his nuggets of genius. From 19th September 2017.