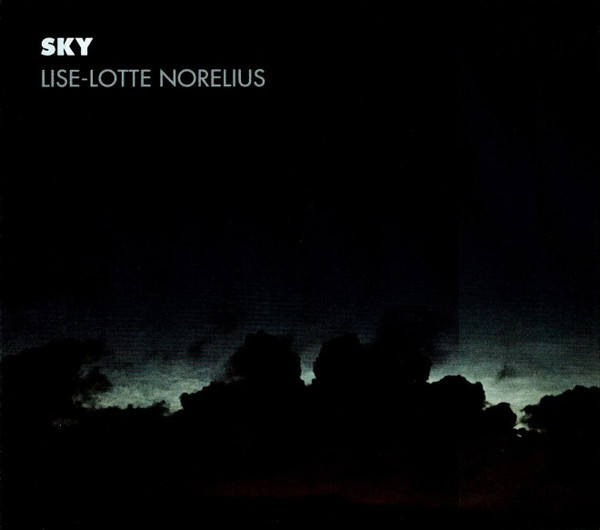 Very happy to hear a new album by Lise-Lotte Norelius, the Swedish sound-art composer whose In Sea album from 2005 has been a long-standing favourite here at TSP Groves. I might attribute this to the density of the compositions, packed with incident and detail without ever getting too complex or abstruse. Or perhaps I might personally savour the somewhat dark and pessimistic air to some of her work, an atmosphere that rarely alludes to anything specific by way of world events, but still perceives an unknowable core of strange energy at the heart of natural forces. In the case of In Sea, I suppose it was the ocean itself and all its gloomy deep-depth inhabitants, such as angler fish, whales, sharks and sea-serpents, which inspired her to limn those sound-portraits of a terrifying force that human agencies cannot understand.

This time, on Sky (FIREWORK EDITION RECORDS FER 1119), it might be the air above us, the canopy of the heavens, the skies, the clouds, the galaxies and outer space, that inspire her to gape in fear and awe at what the Almighty hath wrought. At least two pieces here confirm this in their titles, including the amazing ‘Hungry Galaxy’, but it’s not implausible to read the entire record as a voyage into the inky depths of cold-hearted outer space. The cover images, abstractions of sky, clouds, and light, also are very suggestive in this direction. Her vision of the cosmos is quite unlike that of Sun Ra, who tended to see it as a benign and welcoming zone where he could live in peace as an exile from Planet Earth. Norelius takes a more pragmatic view and is keen to warn us of the dangers lurking at every corner. That friendly galaxy could turn out to be a black hole, a zone of no return.

It’s probably a mistake on my part to be looking for this “unified” view of Sky, however, since it’s a compilation of diverse pieces recorded over 2014 and 2015 and any connections between the themes may be unintentional. One thing is clear, she certainly thinks big, opting to work with four-channel or multi-channel systems, doing it in venues like the ZKM Klangdome (which sounds like a gloriously outsize sound arena), sometimes playing live to add an extra frisson of danger, and also composing for dance; three of the works here were originally created for a piece called Voracious performed by a Butoh company called SU-EN. The record front-loads its most portentous widescreen and grandiose statements at the start of the disc, belting the listener senseless 1 with the remorseless steady throbs of ‘Ramsa’, ‘Bite Group Dance’, and the stern growls of ‘Hungry Galaxy’. True to its title, this does indeed create the sense of outer space as an insatiable monster, a force that is slowly devouring all the planets and life-forces that are unfortunate enough to enter its orbit. Norelius herself seems dispassionate about this catastrophic sci-fi fantasy; just gets on with the job of documenting that fact as best she can.

After this there’s the short piece ‘Pipare’ followed by the lengthy title piece ‘Sky’, which is not as dense as the preceding apocalyptic visions and at least contains a certain amount of oxygen and space so a fellow can take a breath. But her sky is still a threatening zone – not blue, sunlit, and carefree, but rather dark, cloudy, and laced with electrical storms. The huge clouds seem to be spitting out cobras of electricity in slow motion. Rarely has mankind endured such a desperate phenomenon, short of anything that may have transpired in the middle ages, when seers saw signs in the sky everywhere. The final epic piece ‘You Are The Flower’, is much more “minimal” after the crunchy textures endured so far, static and feedback whines and disturbing drones combined with distant rumbling as of a thunderstorm making its way towards us over the Kalix. At all times, Lise-Lotte Norelius has a strong sense of dynamics and compositional arrangement, creating satisfying thought-through pieces with structure and depth; she never allows her materials to run on auto-pilot and never settles for mindless droning atmospheres. A solid and cohesive set of statements. From 19 September 2017.