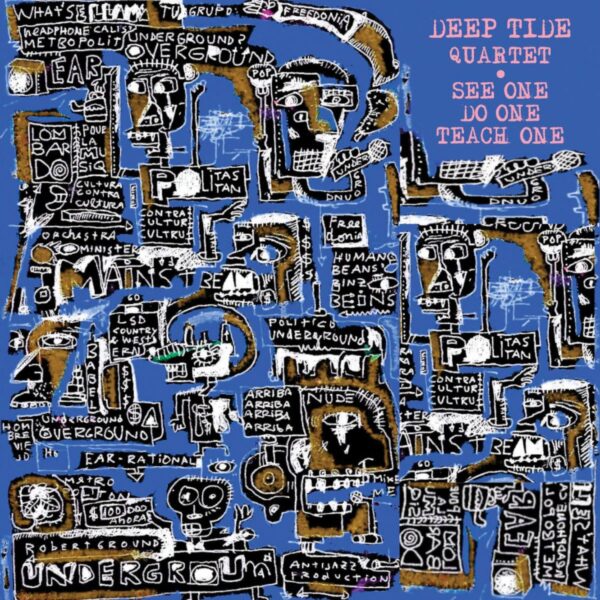 Deep Tide Quartet is another outlet for the many talents of Martin Archer, the Sheffield player who is more than “just” a jazz musician and improviser, with his serious inroads into composition, electronics, rock and jazz-rock, and even experiments with vocal groups and poetry. Unlike his big band exploits which entertain us so much with their complexity and richness, the double CD set See One, Do One, Teach One (DISCUS MUSIC DISCUS 64CD) is very intimate, performed by a small quartet where the gender balance is just right and the respect and friendship between the players is self-evident throughout. These are Archer on tenor and sopranino sax and bass clarinet; Kim Macari, trumpet; Laura Cole, piano; Walt Shaw, drummer (and some live electronics too). Chamber jazz, as we might call it, is the order of the day, harking back to the small groups of the 1950s and 1960s we love so well as represented on labels such as Blue Note and Prestige.

Along with the extroverted party-vibes of the big-band records, what’s also being jettisoned is conventional melody and conventional time-keeping; most of the music heard so far on the set (so far I have only spun the first disk) is determined to strike out into unknown turf and semi-controlled free playing, and content to allow tunes to take a back seat. On one level then, See One, Do One, Teach One might not be far apart from the more reflective and strange moments of Sun Ra in the 1960s, or indeed some of the furthest reaches of the ESP-Disk’ catalogue when jazzers wanted to stop and observe the contradictions of the world to express them using puzzling and puzzled tones, rather than outright “free” skronks and hoots such as we might associate with the BYG label of 1969. This isn’t to say the pieces lack structure. On the contrary, it’s fair to call a good chunk of the music semi-composed, and that by many methods; two pieces use a graphical score, in turn inspired by visual art (sculpture) rather than purely musical sources; one long piece is a “directed improvisation”, bringing to mind the conduction experiments of Butch Morris and others; other pieces had their performances edited, re-arranged and spliced in the studio by Martin Archer, interventions which he describes as “quasi-compositional events created in post-production”.

With all of these collaborations, the gender balance continues to shine through, all players contributing to the total effort. The two sets together amount to what, in the old days of vinyl, would have constituted a four LP boxed set; that’s a lot of music, testament to the prolific achievements of Archer and his crew. The sleeve note advises us to treat each disk as a separate album, and playing them on different occasions is indicated. I mention this because, much as I love Archer and everything he does, this is one set that might have benefited from a little editing; while there’s not a duff track in sight, the sound of the quartet does get a little samey after 78 minutes of listening, in spite of their best efforts to introduce variety. However, there’s also an interesting tension of sorts going on within the group. Often-times the percussion is pushing for action, laying out a very detailed plan that advocates moving fast and arriving ten minutes ahead of time. The piano wants to stay in one place and draw somewhat melancholic conclusions from the vistas and landscapes that surround us. The saxophone wants to gesticulate freely, but is aware of the underlying sadness in the world.

Not every track conforms to this simplistic profile, but it’s these general trends in the music is what gives Deep Tide Quartet their distinctive flavour and characterise their contribution. Autumnal, wistful jazz, constantly informed by nervy energy. From 1st September 2017.