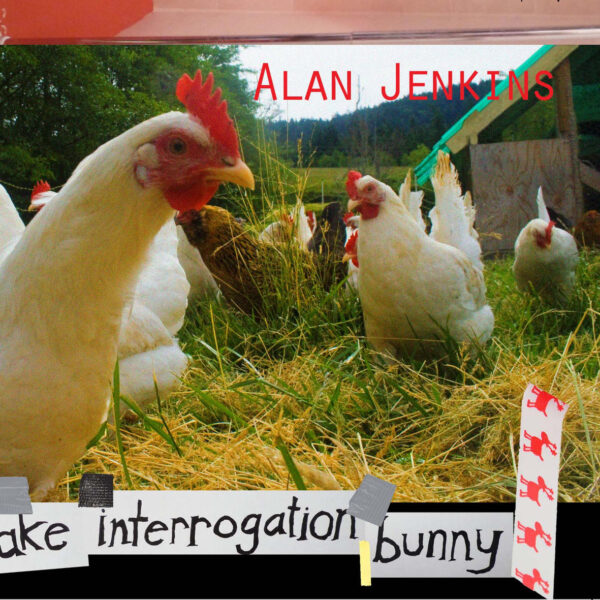 Alan Jenkins is the fellow behind The Deep Freeze Mice, an English band who are often loosely slotted into the “new wave” category and who produced a number of cassettes and albums in the late 1970s and early 1980s…I never really got “into” the Mice, although I must have heard one or two tracks on the compilation albums Obscure Independent Classics I own, which Alan released on his own Cordelia Records label in the mid-1980s. Cordelia also managed to release some records by fellow eccentrics and pop geniuses such as R. Stevie Moore and Chris Sievey, more widely known to the world as Frank Sidebottom, and as I recall the Obscure Independent Classics records were an engaging and unclassifiable mix of oddball and quirky indie-rock songs laced with bizarre humour, alternating with electronic / lite-industrial experiments.

Jenkins continues to run Cordelia Records, now moved from Leicester and operating in Suffolk, and he sent us a couple of records in September 2017. Both of them clue you in fairly swiftly as to their sideways world view, by dint of their titles and collage cover artworks. The first one, credited to Alan Jenkins, is called Disaster Cake Interrogation Bunny and features a picture of chickens on the cover, the image slightly détourned by additions of Christmas wrapping tape and duct tape. Inside, there’s a picture of Alan collaged to make it look like he’s holding up a rat, an image that conjures both a wry chuckle and a tiny frisson of disgust. We might say the same about the Dundee cake on the back cover, evidently tainted with a giant octopus whose tentacles are creeping out from inside like a colony of giant worms. On the disc are 15 jolly songs, performed by Alan with the help of Lenny Snake, Neil Ska and Minnie Bannister, for the most part playing highly competent beat-combo backdrops with guitars, organ, and drums.

The twist is in Alan’s goofy lyrics, half-sung and half-spoken, littered with semi-surreal images not unlike those we see in his collages; the details amount to a very individual world view, to put it mildly, and it’ll be a while before I crack the code of Mr Jenkins’s mind to discern any patterns behind his whimsies and brainstorms. One song that communicates in a slightly less oblique fashion is ‘Citizens Of Nowhere’, a pessimistic survey of the British populace, indicating its author is clearly jaundiced by post-Brexit vote events. Alan’s singing voice is something of an acquired taste, but it’s honest and direct, and there’s clearly conviction weighing in behind every syllable; it takes a certain commitment to the DIY ethic of the 1980s to allow such unvarnished vocal tracks onto the finished recording, where every hesitancy and mistimed pause is audible. When he launches into his rendition of ‘Search And Destroy’, the Stooges song which seems about a hundred miles away from his own vision of what rock and roll means, there’s a certain disconnect which is really something to savour. 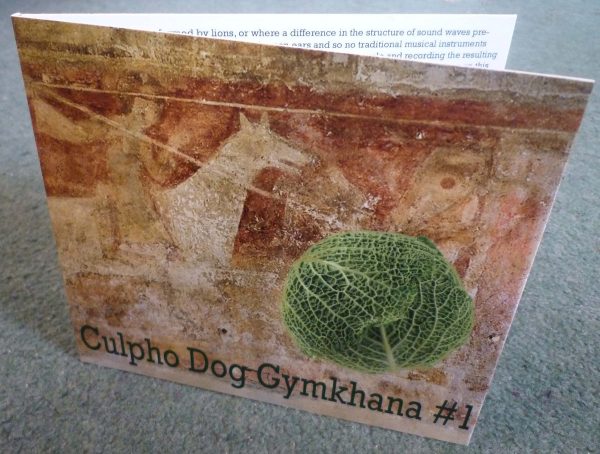 The second record is by Culpho Dog Gymkhana and may or may not be titled Culpho Dog Gymkhana #1. Here the cover art is less whimsical and the collage technique shades into something disconcertingly bizarre with its absurd juxtapositions, where the image of a cabbage dominates to the extent that it almost becomes an icon, or a parody of an icon. Two long tracks of 20 minutes apiece are assigned zanoid titles that Tristan Tzara would’ve given his left monocle to devise, and the third short track pays explicit homage to a founding father of Dada, Kurt Schwitters. The first track comprises a long instrumental suite, which I assume was created by editing, and it combines prog-rock inflected meandering drones (organs and electronics) with lively surf-rock instrumentals and crisp rhythms. It’s as though the Pink Floyd circa the time of Meddle had somehow been invaded by The B-52’s in the studio, and the ensuing battle of musical imperatives created this strange bastard offspring. This is a good thing by the way, and I’m finding this rather balmy art-music melange more of a successful proposition than the off-kilter indie pop of the first record. At certain points it is possible for the listener to completely lose the thread, and we end up adrift in a morass of uncertain sounds lacking any reference point to help us steer back to shore. This may be the point; it’s to the credit of the Culphsters that they manage to create this palpably strange vibe without once appearing self-important or pseudo-mystical, traits which have thwarted the schemes of many a would-be mystery droner.

The second track is less music, more abstract; a deeply puzzling assemblage of field recordings (maybe) which have been heavily disguised with backwards-masking and echo, and presented to the listener with a few vaguely recognisable signposts for familiarity. For the most part, it’s almost menacing in its inscrutability; if we’re still in post-Pink Floyd territory, this is closest to sides three and four of UmmaGumma. Culpho Dog Gymkhana deserve some sort of medal for their stubborn persistence with this peculiarly English take on the genre of musique concrète.

The inner gatefold of this release is devoted to several paragraphs of wacky mythology about this made-up band, whose identities are kept secret and cloaked behind a shaggy-dog story packed with absurdist details; it reads like a parody of any art project that has ever received funding from a University and whose makers are compelled to bolster the experiment with yards of pretentious prose as they fill in the application grant form. If I am right, this would all fit quite well with what I perceive the Alan Jenkins world-view to be, based on these two records. From 20th September 2017.