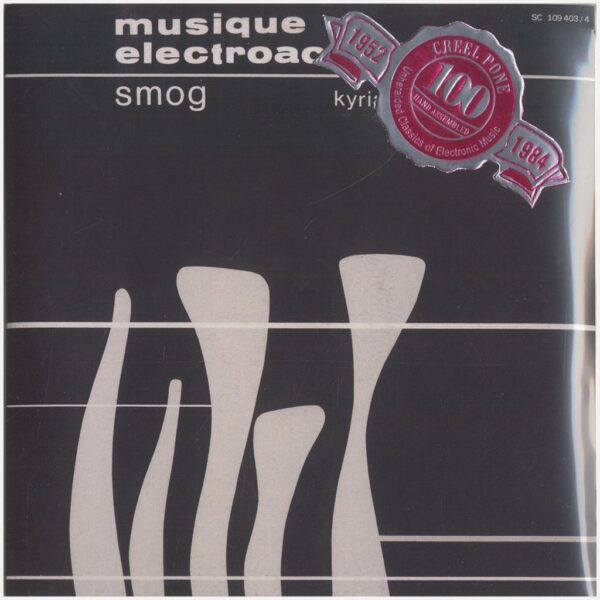 Reputed to be one of the first works composed for four-channel tape in the world when it was first released way back in the mid-1970s, this score for the ballet “Smog” is an intriguing journey of analogue synth drone meandering accompanied by electric organ melody. There is a sense of wonder and adventure, and of curiosity in seeing how far synth melody, samples of found sound, drone and noise, and various combinations of these can go without repeating themselves. On the whole the music appears to be bright and happy but there are moments of melancholy, intense feeling and loneliness, and the peppy nature of the music could also be interpreted as a slightly desperate attempt to connect and communicate with others.

CD1 rushes hither and thither from raw sonorous drone and jackhammer rhythm to quieter, more fragmented delicate melodies, and back … and covers plenty of musical territory and moments of silence in-between. At times it seems very self-absorbed, glorying in its discoveries of bouncy, vibrant pulsing tones and rhythms that verge on light-industrial. Sometimes sounds can be harsh and blaring but for the most part this disc is a very pleasant listening experience. The piece can be useful as a source of library music as snippets of sound that seem to border musique concrete on the one hand and improvisation on the other appear in a long winding tapestry of ever-changing sounds and moods. As the music continues, new surprises arise (later music seems to mimic electric butterflies and a toy train) but overall the music has a light feel.

CD2 sounds even more experimental and hyperactive, starting with toy electronic drone melodies that initially seem gay and carefree but which might mask an underlying loneliness. It might be just my imagination or something I read about Sfetsas on Wikipedia before reviewing this double set but at times the music does seem a little desperate, trying to reach out to listeners. As with CD1, there are many surprises in store for listeners: the disc is not quite as harsh as CD1 can be at times and the music seems more playful if less musique concrete. There are also quieter, more muted moments of mood music and spoken voice recordings feature as well. The final track on the disc is a joyful piece of light-hearted electro-pyrotechnics.

This is an interesting double set of hitherto obscure electronic / electroacoustic music from Greece, composed and released at a time when the country had just come out of authoritarian military rule. Heard as a whole, it can be quite heavy-going – much of the music demands your full attention – and the discs merit separate hearings.