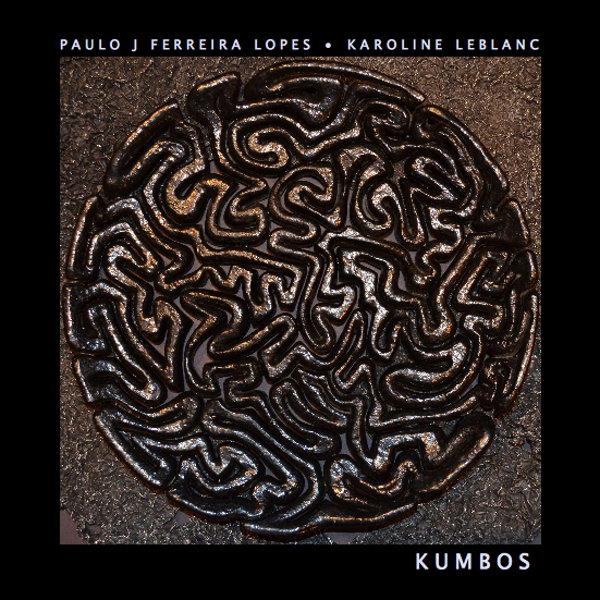 Karoline Leblanc of Montreal sends us the latest small-run edition from her atrito-afeito label. This time it’s an electro-acoustic composition by Paulo J Ferreira Lopes, last heard on 2017’s A Square Meal from this same label. On Kumbos (atrito-afeito 008), he plays synthesizers, operates the reel-to-reel tape decks, and adds percussion and “electromechanical devices”, while Leblanc assists with keyboards – most notably the sonorous lower-register piano chords which hold everything together in the early passages. You may recall that Lopes was the drummer on the Square Meal improv record, but it takes a while before we reach the percussive passages on this slow and lugubrious composition. The chain of thought is not clearly expressed, Kumbos feels bitty, and also rather old-fashioned; it seems too deeply rooted in the conventions of modernism and afraid to make an innovative statement, or even a personal mark. In its favour, I do like the old-school “steam-driven” sound – nothing digital in sight, unlike so many of those Canadian electro-acoustic discs from empreintes DIGITales. Lopes doesn’t over-manicure his sounds and knows when to leave well enough alone. (Received 02/10/2017) [Updated 05/06/2018 to remove incorrect information.] Erik Friedlander often associated with jazz/improv playing is also showing his mettle as a composer. On Rings (SKIPSTONE RECORDS SKPST 023) he’s joined by Shoko Nagai and Satoshi Takeishi to form the Black Phebe Trio, and with all-acoustic instruments (cello, piano, accordion, percussion) they emerge as a modernist chamber ensemble playing the inventive and sprightly tunes of Friedlander. 12 tunes; each tune has repetitions (or “rings”) structured into the composition, and the whole set is intended to have a conceptual unity, rings within rings. This plan is furthered with the use of looping technology which occurs on tracks 8-10, collectively called “Rings”; the idea was to use this as a compositional / improvisational tool, allowing the other musicians to play around it. Scott Solter the recording engineer is the man to thank for the very direct, uncluttered recording sound, but the trio also play in a very “clean” manner, each instrument clearly separated resulting in a crisp effect. Various moods and modes; from folk-dance inflected jigs to introspective and reflective pieces. From 12 July 2016. At a stretch we could call Rutger Zuydervelt a composer on the record Becoming (SELF-RELEASED NO NUMBER), as it was another piece commissioned for a piece of contemporary dance, and in my scheme of things we could align it with the activities of John Cage and Merce Cunningham. As Machinefabriek, Zuydervelt turns in a single 39 minute piece of electronic music characterised by his typical drones, distortions, light-noises, and layers of field recordings. This is the fourth time he’s worked with choreographer Ivan Perez, and for this piece they decided to improvise the music live on stage as the dancers were performing, so it’s an instance where the actions of the dancers help to shape the piece. For about first 25 mins, everything evidently happening in slow motion or underwater; graceful dolphins at play; music reflects small movements and grace. A brief passage contains heavier “action”; unwelcome invading forces seem to destroy the Garden of Eden atmosphere; gritty metallic noise represents sound of virtual bulldozers. We soon return to a blissful heavenly choir state after this. Slowly, Becoming tells a story. The pink cover made me think it was a Dolphins From The Future record, hence the reference to dolphins. (31/10/2017)