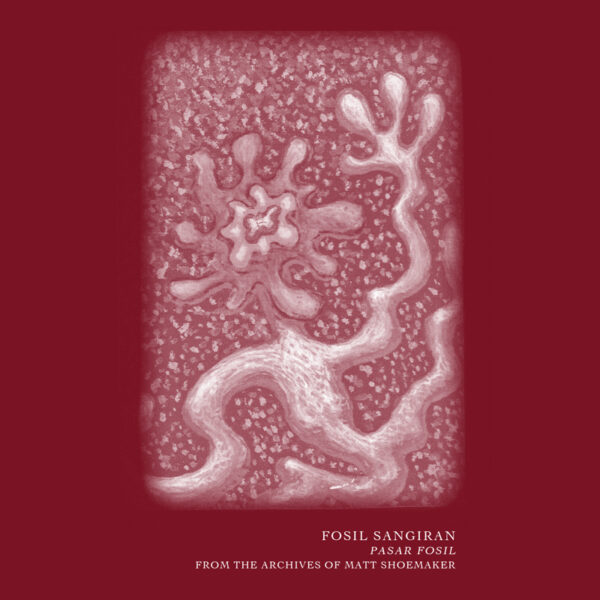 Released together with the beats-oriented “Khayal Kuno”, this tape from Matt Shoemaker’s archived musical work seems a more restful, amorphous and less urgent recording – but at the same time, due to its unstructured nature, “Pasar Fosil” is a more mysterious beast. It resists understanding and defies facile categorisation. Sure, I could just call it a darkly ambient and immersive beast that creeps up on you slowly and gradually draws you into its maw through sheer sonic hypnosis, and that would be true. But for all its apparent graveness and monumental nature, the work is never overbearing, perhaps because its growing intensity is as much the aim and the journey towards that goal. When you have all the time in the universe to reach its centre, you may as well use all that time to taste and savour all that you experience along the way.

The impatient among you might prefer “Khayal Kuno” but you all should at least give this recording a hearing at least to appreciate Shoemaker’s intense focus and care in growing the music, cultivating its side branches as a gardener tenderly cares for a young plant that will become a mighty wooden colossus whose slow-growing extensions and leaf canopy will shelter a million other plant and animal species. At some point the tree itself will become self-supporting and from there its future growth and development become independent of the gardener’s goal and actions. In like way, the music seems to take charge of its own slow growth and development and ripens into something rich and layered.

The B-side is even more eerie in sound and atmosphere: the music can appear quite alienating at first but it’s never menacing. It just forges ahead (if slowly) and listeners can follow on the understanding that the music makes no concessions to their likes or dislikes. The wobble noises – Shoemaker used springs as instruments in his music – gives the work a hypnotic droning quality. Eventually it becomes hard and machine-like, and industrial noises start to rattle the drone. Listen some more and the drone becomes whatever it reminds you of: a cruising space-ship, a chainsaw slowly coming alive, a looming storm on a planet of metallic atmospheres and clouds.

If 20 years pass while listening to “Khayal Kuno”, you’ll swear 200 million years pass on “Pasar Fosil” – it really is such a massive sonic experience.