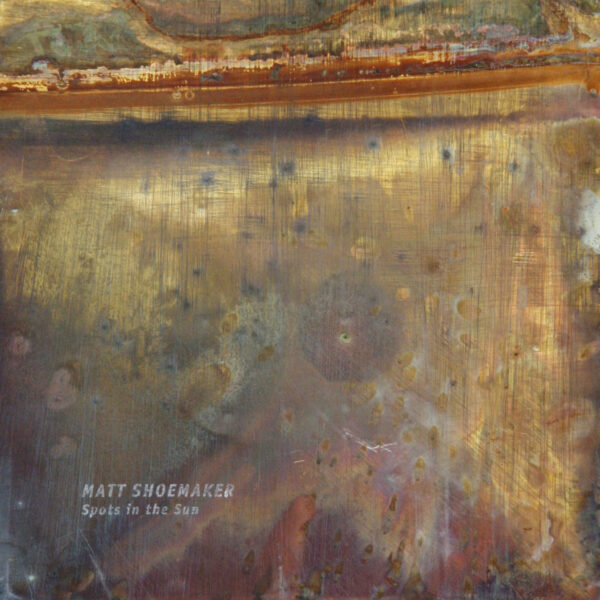 Like other releases of his which I’ve heard, this recording is an immersive sonic universe, full of mystery and activity. The album title suggests an intense, perhaps turbulent world of tremendous heat and unbearable pressure, and perhaps the work is intended to be so – but in amongst the whirling drone and deep moaning sighs there is a soothing serenity that suggests the vastness and wonder of the cosmos in which our solar system has its place. Maybe that’s not the impression Shoemaker had wanted to leave with listeners, and there’s more brutality and chaos in the work than I’ve found so far, but once released into the public sphere, this recording is out of bounds from its maker (and now even more so after his death in 2017) and can be interpreted by listeners as they wish freely.

Divided into four parts, “Spots in the Sun” features droning sound art as you’d expect from Shoemaker; the music may be fragmented but its intense nature, whether still and quiet or unruly and agitated, is the backbone that gives shape to the sounds. There always seems to be some order in the whines and tones that pass through, no matter how widely separated they may be. A solemn epic quality is present. Surely and steadily the music passes through stages of development and evolution from sparse and quiet to a densely packed series of booming storm, agitated bird cries, shimmering bell tones and shrill drone foretelling a looming disaster. Later in the CD, the music grows into a grand steely edifice, only to collapse suddenly (without leaving any debris) into a compressed state that quickly expands again.

Found sounds and field recordings tend to be left as they were recorded originally, giving the work a raw immediacy and grounding it in the real world. At the same time they blend easily into the more abstract experimental sounds created by the artist so the whole work flows much more smoothly than you might anticipate.

There may be sudden surprises and abrupt spurts of violence but on the whole I found this recording very steady and orderly, gradual rather than unpredictable, and adventurous in its attempt (I think) to encompass a particular solar phenomenon. Much beauty and a sense of wonder and awe are to be found here. In remembrance of Shoemaker, The Helen Scarsdale Agency has made this album free of charge (though buyers still need to pay shipping and insurance costs) so if you are keen on his work, you have no excuse not to include “Spots in the Sun” in your collection.