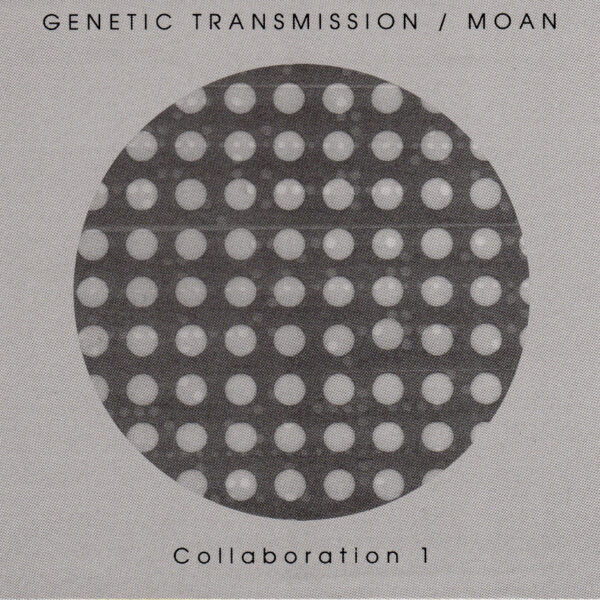 The Zoharum label in Poland continue their mission to restore Genetic Transmission (i.e. Tomasz Twardawa) to his rightful place in the pantheon of Industrial music with their ongoing GT Archive Series. We noted some entries in the catalogue in 2017. Here are two more productions that no self-respecting fan of painful metal noise can afford to be seen without. Collaboration 1 (ZOHAR 149-2 / GT 03) is credited to Genetic Transmission and Moan, was realised in 2003, and constitutes one of those projects were creators swap “materials” back and forth for mutual reworking. As to what these sound sources may have been, the notes remain silent, but what ends up on the finished tape is a dismally depressing grind, mostly abstract and shapeless. I was admittedly surprised by the overall “quiet” tone of the record – compared to the early 1997 assemblage of brutal clanks and metallic clonks, it’s positively subdued. But it tends to sap the energy and vitality from the listener, until all hope is lost. Moan is someone from the Silesian region (part of Central Europe which overlaps with Germany and the Czech republic), and may be Rafal Sadej; he too is held in high esteem as an important player in the Polish industrial music genre. The pair team up again for Dedicated To Luigi Russolo (ZOHAR 150-2 / GT 04), which is a split they made in 2004. Moan’s piece is called ‘Men At Work’. I’m glad he picked this title, as I couldn’t help hearing parts of Collaboration 1 as a sound portrait of a dismal factory, and feared I was committing a gaffe thereby. Moan realised this for an exhibition of the same name that took place at the Jaworzno Museum in early 2004, and it’s intended to be heard as an installation work on continuous play, rather than this 29:55 single track. Metal objects were the sound source, but he does go a fair way to alter them and sublimate the sound; layers, movements, space, are all strong features of this utterly non-musical work. Genetic Transmission’s piece is called ‘Przebudzenie Miasta’, a phrase which more or less translates as ‘Cities Waking Up’; he made it with metal objects and a radio set, and it lasts for 35 mins as it tells its strange story. Not bad, actually; though grey and joyless, there’s a lot more variety on it than Moan’s rather static picture of the factory floor, and we seem to have advanced from one place to another by the end of the piece. Needless to say, Twardawa’s vision of the city is not one filled with happy milkmen waving at traffic cops like in some cliched Broadway production. Rather, he ups the ante on Fritz Lang’s Metropolis and depicts an inescapable iron prison clogged with pollution, smoke, and not a glimpse of the sky anywhere among the domineering towers. What we hear is a 2003 reconstruction of his original 1999 recording, of which the master tape has been lost. Both GT and Moan pay homage to the Italian Futurist Russolo with their title; I had no idea, but apparently he is claimed by many as the father of Industrial music. Originally issued on a CDR in 2004, this is a remastered limited edition release. From 25th October 2017.