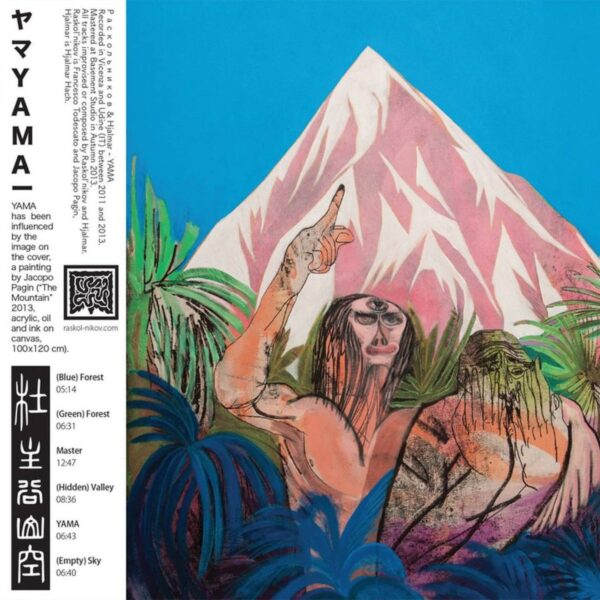 On one level, this album of ambient electronic soundscapes traces a journey through forest and mountain landscapes before ascending into the sky. On another level this journey may be an allegory that says something universal about the individual or collective human journey, be it spiritual or evolutionary; it could also be about human ambition and aspiration. However listeners might interpret the album, depending on what they bring to it and what they expect out of it, “Yama” is certainly an interesting music travelogue of intriguing sounds, atmospheres, moods and immersive alien sound worlds.

All tracks have something very different to say, in keeping with the album’s theme. The music starts minimally with bare-bones electronic melody and beats in “(Blue) Forest” and escalates into more layered and lush pieces with exotic atmospheres and rhythms. “(Green) Forest” is shrouded in ghostly mystery that gradually reveals a cool temperate bushland of tangled trees with dripping canopies, in which strange birds and insects hide and sing beguiling melodies or drum out odd gurgling rhythms. A tribal beat starts up and travellers can almost imagine hidden shrub nets and shelters opening as local people peer out and observe the strangers in their midst. Birds start cawing raucously and snakes and crickets hiss in reply.

Alas, as the album continues, it plunges deeper into unforeseen ditches and strays on barren plateaux longer than I would have preferred. “(Hidden) Valley” has some beguiling effects and rhythms underlying the otherwise bland and blah droning accordion noises, and the track is a jumble of noise and rhythm loops going round and round in circles for most of its running time. Maybe this meandering is a necessary part of the journey; if so, the musicians still have work cut out to convince listeners to hang in and focus on the end goal while passing up hill and down dale, and repeating the routine over and over. The title track is a ride into some very dark and treacherous music territory – but again, I have the feeling that the journey lingers longer than it should, just so the spooky voices from another dimension can deliver a message, a set of instructions or a warning to listeners.

Final track “(Empty) Sky” has an appropriately wide-open feel and a mood of hope and optimism. The music either completes the journey and its aims or it points to another stage of development, another adventure to be undertaken.

In all, “Yama” is a pleasant journey into some very immersive soundscapes. The first three tracks on the album are very enjoyable as minimal ambient electronic mini-soundtracks but from then on the journey towards the sky starts to drag when it should be turning more arduous. The later parts of the album seem a bit too smooth and bland when they could be rugged, raw and challenging. It’s almost as if the goal the musicians have set and the adventure they planned have become too far-reaching for ordinary mortals to achieve and we have all ended up falling far short of the prize. But perhaps overcoming this adversity is another story for another album to complete.