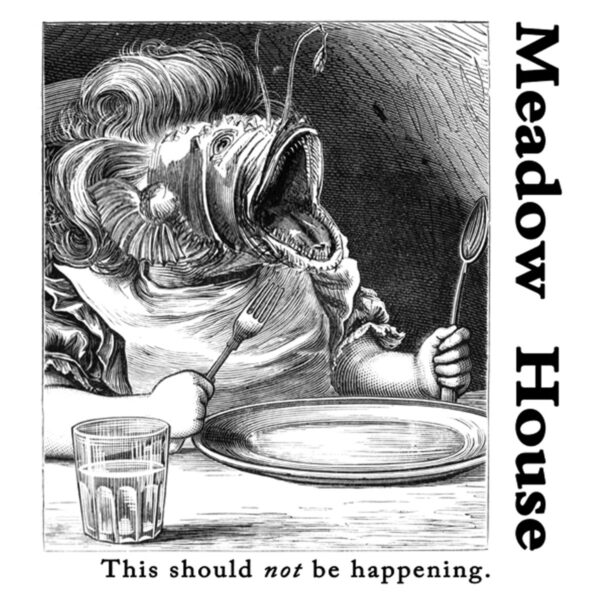 The second of two LPs sent here by the singular talent Meadow House, an alias that conceals the one-man band, singer and songwriter Dan Wilson.

This Should Not Be Happening (FEEDING TUBE RECORDS FTR345LP) has found its home on the American label Feeding Tube Records, home to many marginal records and a natural landing point for any outsider. I gather these 13 tracks were all previously unreleased, and have been selected from a much larger pool of unreleased Meadow House songs by Joey Pizza Slice. It’s certainly a curated, themed compilation; Slice (a home recording artist who works with cassette tapes in Burlington Vermont) freely owns that he was going through a period of depression himself, and in that condition couldn’t help but chose some of Wilson’s darkest songs for the LP. Overall, this is indeed much more of a depressing listen than the above, but don’t let that prevent you from investigating. There’s still a lot of Wilson’s near-painful honesty on offer, and though many of the songs are about suicide and death, we have to admit the singer appears to be resigned to his fate, as if he’s given up struggling to some degree; he’s managing to make artistic capital from his own alienation.

Let’s start with the death songs – ‘Cutting’, ‘Carbon Monoxide’, ‘Risky Old Business’ and ‘So Many Colourful Ways To Try’ are all directly concerned with suicide and various ways of doing it. ‘Cutting’ is almost pure nihilism, laced with more of that visceral imagery noted above, yet it’s also sung in an upbeat, near-jaunty fashion as he considers wrist-slicing in all its juicy detail. ‘Carbon Monoxide’ is also manic in its delivery, packing in horrifying glimpses of dying motorists in a tone verging on the inappropriate. But this disconnect gives these songs their ironic strength and bittersweet taste; the listener doesn’t know where to put themselves.

That same jauntiness can be heard on ‘Submarining’, almost a pop song in which the singer describes the benefits of seeing life from below the level of the gutter. He’s both spying on the world and mocking it. The absurd image of Wilson driving around in a magic submarine is a rather self-conscious metaphor for his worm’s eye view. For a less palatable take on the same condition, listen to ‘Bitterment of Self’, one where the total lack of self-esteem is matched with a cruel vengeance and envy against the world. On ‘Fleas’, at least there’s an attempt to rise above the self-pity with some humour, as the protagonist now feel so small and insignificant that even these tiny parasites are taken to be friends; in fact he seems to welcome the symbiotic relationship between man and flea. ‘Time On The Hands’ is likewise burdened with much self-pity, but I like the odd distorted way the recording has landed on the tape; ‘Risky Old Business’ also has layers of chaotic noise scrabbling up the surface of the urgent song, creating a highly unusual effect. ‘Eat It Up’, a throwaway chant that’s effectively a shopping list of pharmaceuticals (perhaps intended as a palliative to reduce mental stress and anxiety) is likewise treated to include a brief and alarming “rush” effect near the end of the song – perhaps the drugs are working only too well.

Two standout songs: ‘The Hermit’, weighing in at a hefty four minutes, with its story about about an imprisoned shut-in, punished by parents (and society), blamed for everything, a scapegoat for the world. Wilson spares no details in this unsettling composition, which starts out in the depths of despair – and gets worse from that point on. Few have the mental courage to conceive songs like this, let alone manage to perform them without showing the strain. The other song I like is ‘Every Walk Down Time The Streetstreet’, a fractured vision compressed into just two minutes and seven seconds; brutal unpleasant imagery is either stated outright, or suggested, lurking in the dark shadows; the singing voice, perhaps slowed down by studio technique, writhes in some lugubrious non-place of mental anguish. The ambiguous lyric here deflects common sense analysis; it’s much less obvious what it might be about, compared to other songs on the album.

While I think the title This Should Not Be Happening is a bit of a gaffe, the cover art for this release is a highly effective collage made from old engravings. A hungry infant at the table has their face replaced by the head of a deep sea fish, mouth agape. For Captain Beefheart, his Trout Mask was anything but a mask, and was more likely to be a potent way for him to express and project the truth of his own inner strangeness, the rage of his wild poetry. Here, the entire image betokens alienation, but also a desperate inner need – the infant’s longing for affection manifests itself as a wide-open mouth, lunging forth, ready to accept any scraps of compassion. The inner emptiness of the human protagonist is matched by the empty plate on the table, while the background is a disturbing mix of chaotic etched marks and dark shadows, the very opposite of a comforting home. To hear songs which correspond exactly to the horrors of this visual psycho-drama, you need only purchase this LP.