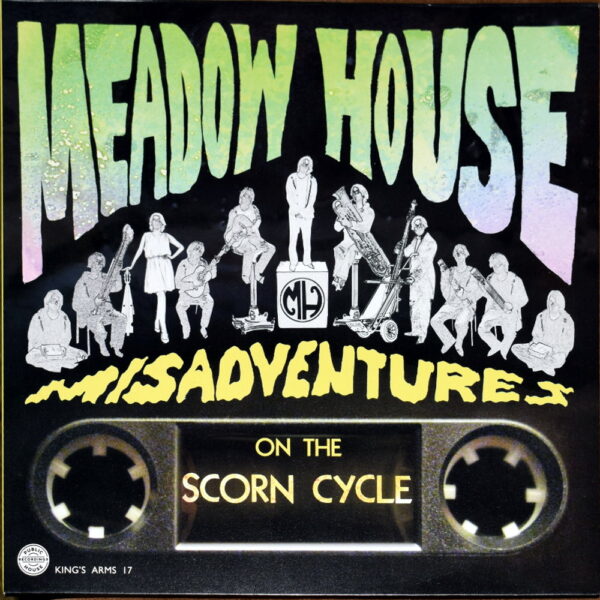 One of two LPs sent here by the singular talent Meadow House, an alias that conceals the one-man band, singer and songwriter Dan Wilson. We heard his 2005 LP Tongue Under a Ton of Nine Volters and, more recently, the CD Attempts & Results which I had characterised a bit superficially, focusing on the slightly “wacky” lyrics and general air of addled barminess that oozed from the eccentric arrangements, performance, and tape collaging; Wilson evidently being a player who likes to let all the joins show in his productions. However, Misadventures on the Scorn Cycle and This Should Not Be Happening take us deeper into darker turf, particularly the latter release, and have obliged me to reappraise somewhat the work of this impossible-to-pigeonhole player.

Misadventures on the Scorn Cycle (PUBLIC HOUSE RECORDINGS KINGS ARMS 17) may have originally surfaced as a demo CDR which Wilson was using as a calling card around 2002 to 2003 1 . Five of the songs are [new] versions of songs originally released on Tongue Under a Ton of Nine Volters, and two of the songs had prior versions on Attempts & Results. There are a few collaborators named (one of them kept anonymous), and odd sources identified for found tapes, e.g. “a cassette found in a wall cavity at college” found its way onto the A side. From this image alone, already I have an inkling of Dan Wilson grubbing around like a dung beetle 2, collecting what rejected scraps he may from the forgotten and overlooked spaces in society. More than once on this record, we’ll learn what life looks like to him from this worm’s eye view.

Short songs, all rendered in Wilson’s completely unaffected singing voice, and presented with the trademark “ramshackle” performance and assembly that often sounds like it’s been created with a mix of toy instruments, junk, and lo-fi dictaphones. If nothing else he takes the DIY approach to a new level of innovation; yet there are happy accidents in among the clonking and dribbling performances, fleeting moments of something resembling a form of evanescent beauty. Whatever his overall production method is, Meadow House has got it down pat and always makes it work in his favour. At least two songs here, ‘The Magician’s Apprentice’ and ‘Minger’ take pains to reveal their own method of construction to the listener, production “mistakes” (like tape wobble and wrong speeds) laid bare. I would still maintain that Wilson isn’t much of a songwriter (his songs lack satisfactory endings, for one thing), but who cares about convention when faced with this much originality? You could say that as a writer he needs editing; but editing is the last thing we’d want to apply to songs like ‘Wrecked Liberty Cap Harvest’, ‘Midgefly Larvae Lover’, ‘Minger’ and ‘Temperamental Coffee Machine’; these four I would single out as tiny masterpieces of that form which some might call “stream of consciousness”, where Wilson’s chain of thought is allowed free vein. Obscure symbols and bizarre images spring forth abundantly, as if drawn from a bottomless well. And if you want a song to tell a story, drop the needle on ‘House Invasion’ or ‘A Disturbance In The Pancake Shop’ as exhibits A and B. They’re absurd stories, with no character development, no discernible point and no moral; but at least something seems to happen, events transpire in these products of an unusual imagination.

I found evidence of the darker and more damaged side of Wilson’s psyche lurking in various corners of this LP. ‘The Magician’s Apprentice’, ‘Temperamental Coffee Machine’ and most notably ‘First Time at the Hairdressers’ all seem infected with glimpses of the visceral, the body in disrepair – fluids, juices, blood…I seem to see scabs forming on the body of the lyrics, unless I’m dreaming it. These may all be external metaphors for the damage Wilson sees in the sick world around him, or perhaps damage he would like to inflict on it. Then there’s the songs written from the viewpoint of an unhappy and introverted loner, holding grudges against the normals and casting malevolent hexes on “healthy” members of society. Songs which do this very well are ‘From Insult to injury’; ‘Extrovert vs. Introvert’, whose hissing vocal spoken at 100mph is a scarily accurate portrait of an unwanted inner demon injecting bad thoughts; ‘Bad Miasma’, whose symbols and images are teeming with existential dread; and the two revenge songs, ‘The Lesser of Two Evils’ and ‘Disco Vomit’. In both cases Wilson seems to be nursing grudges held from his adolescence, the first song directing barbs of hate against muscular sports-players in the showers, the second at happy party-goers at the disco. He would love these “straights” to wither under his harsh invective; words are thrown like an acid attack.

On the obverse, there’s the whimsical side of Meadow House exhibited on songs such as ‘Mice’ and the Pancake Shop song mentioned above; they’ve got the same kind of disingenuous patter you might find from Deep Freeze Mice, and indeed the ‘Mice’ song is almost charming despite the near doggerel of its dumbed-down lyric. It may be helped by the anonymous guest vocalist on this track; she has a lot more light and cheer in her voice than Wilson, try as he may to wear the greasepaint of a clown. I’d also like to single out two songs on side two, ‘Wrecked Liberty Cap Harvest’ and ‘All Petty Substance Flee’, which are not only well-constructed melodies (compared with the rest of the “that’ll-do” assemblages on offer), but offer us brief moments of fleeting beauty that verge on the psychedelic; when the vocal and instrumental elements match up just so, it’s like a hit of sunshine. 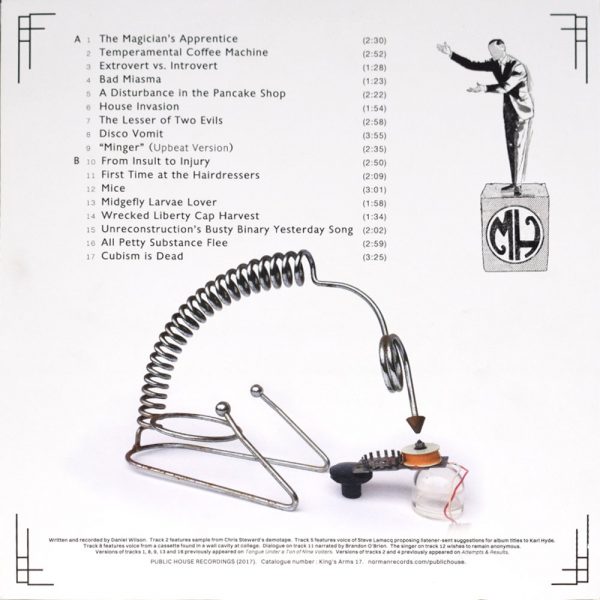 The cover art of Misadventures on the Scorn Cycle may look unassuming, yet all of its components are telling us something. A row of 11 musicians all turn out to be Dan Wilson in disguise, indicating the one-man band method by which the record is made. The conductor of this small orchestra is on a podium with the MH initials written in curly writing; the image is picked up and restaged on the back cover. I like the idea that Meadow House could have been a between-the-wars English dance band, playing at a tea salon; this harking-back to more innocent times isn’t completely at odds with Wilson’s plan, I suspect. The close-up photo of a cassette’s capstan wheels remind us of his commitment to the lo-fi aesthetic and home recording. The sickly green lettering, fading into pink at the bottom, feels to me like faded psychedelia, the lettering on a poster by a fourth-rate prog band performing at Middle Earth in the early 1970s. Lastly, there’s the distressed edges used on the word “Misadventures”, a subliminal reminder of the psychological horrors (via EC Comics, such as The Haunt Of Fear) that form the subtext to this release.