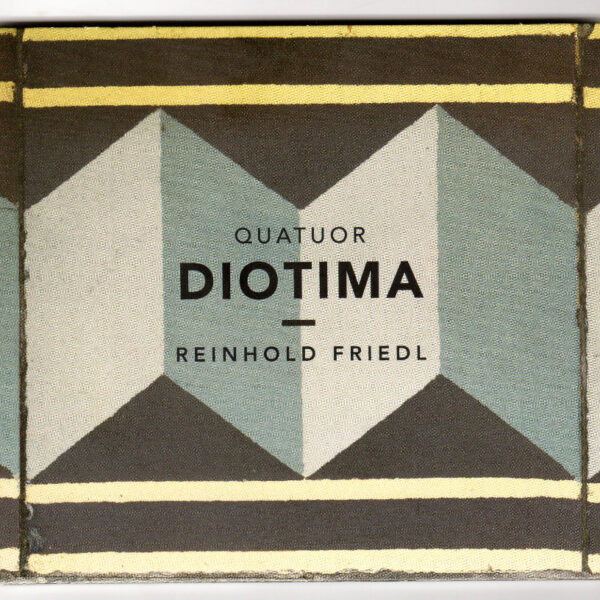 Reinhold Friedl has released Quatuor Diotima – Reinhold Friedl (ALAMUSE ALM008), a slab of contemporary classical showcasing three of his string quartets. Though I say intimate, it’s probably still some way from “approachable”. Each composition has a certain complexity as part of the overall design, which for one thing makes them very difficult to perform. So what else is new, given Friedl’s penchant for near-impossible scores! Only Quatuor Diotima are man enough for the challenging tasks set by this German taskmaster. On ‘String Quartet No 1’ from 2005, there’s something which he gleefully calls a “strange choreography”, meaning the instruments can only be bowed with a circular motion, presumably according to a strict rule baked into the score. Can you even try to visualise the contortions the players must have gone through? Not only does the music come across as awkward and crippled, but it’s also powered with a strangely compelling power; you can’t stop looking at its ungainly shapes as it clops along.

‘String Quartet No 3’ from 2016 may seem superficially more digestible and not too far apart from the more astringent moments of Bernard Herrmann’s suspense-movie scores. This may be a case of each listener hearing what they want to hear. Friedl has deliberately buried famous musical quotes in these nine minutes of music. It’s not clear if we’re expected to do any work decoding these crossword puzzle clues, or simply enjoy the total effect. Clever, though. It’s as though he assembled a coherent essay while drawing selected phrases from a library of 20th century classic literature. T.S. Eliot and James Joyce would have approved, no doubt. He’s also pleased with the lack of a “culmination point” to this piece, which may be reference to what all feminists hate about Beethoven (and most classical composers, come to that); the usual masculine drive to rush to a sexual climax is somehow sublimated into the symphonic form.

The last piece here was composed for Quatuor Diotima, a crack team of players who have been sawing away since 1996 since their foundation in Paris, the home of the croissant baked in the shape of a cello. They effortlessly swallow contemporary classical players in their collective belly, and still find time for giving a new spin to old school crowd-pleasers like Debussy, Schubert, and Janacek. On ‘String Quartet No 2’, written in 2009, these hardcore rosin buffs really have a chance to shine with their iron grip, their steely fingering control and extremely delicate bowing movements. I’ve never heard anything so deserving of the term spectral; it’s genuinely terrifying, audio ghosts right there in the room. Yet Friedl intends it to be “a sportive piece” – wouldn’t ya just know?! If Reinhold Friedl invites you to a game of table tennis, beware brother…at any rate, even he admits how hard it must be to play this demanding music, and chortles to himself at what a “physical challenge” this piece grows into, demanding that a tremolo action be performed non-stop to get the desired effect. A killer album…buy this and you’ll never settle for blow football again. From 29th November 2017.