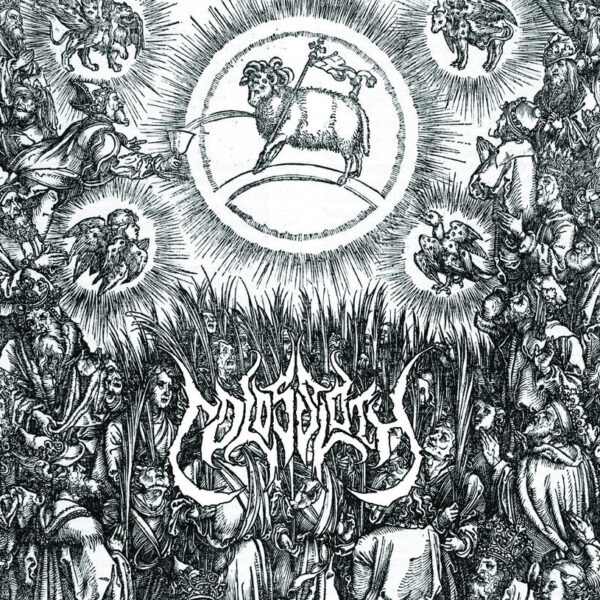 Powerful black electronic noise from Colossloth on his Heathen Needles (COLD SPRING RECORDS CSR235CD) album…this is a solo effort from Leicester whose owner-operator is Wooly Woolaston and has been inflicting his audio pain on the world since around 2006, as far as we know, starting with the Black Mermaid cassette for US label Scumbag Relations, and a short EP on the Skribble label. Never heard these early efforts; he may have started out in the “doom metal” territory, but now he’s doing “dark and cold electronics”, and this is his second album for Cold Spring Records (the UK natural home for such grisliness), following 2015’s Outstretch Your Hand For The Impress Of Truth.

Colossloth projects an image of one of these “avenging angel” types, a solitary fellow with a grudge against the world who likes to preach with solemn, portentous messages…I say this even though there isn’t a single “song” with intelligible lyrics on this release 1, but I think you can tell a lot about a creator’s interior landscape from titles such as ‘We Had A Pact’, ‘Forcing The Error’, and ‘A Place Where Your Dreams Can Die Alone’. Add to this he’s got a logo which is very much in the old school Black Metal design tradition (symmetry, jagged lines, twisted shapes) and the cover art (by Abby Helasdottir) is an old book engraving depicting a Biblical Apocalypse. I sense it doesn’t pay to get on the wrong side of old Woolaston…he might wage a vendetta against you for the next 25 years.

Even so, this record is an impressive feat of sonic mayhem – plenty of wild textures, obnoxious snarling tones, distorted crunched-up lumps of ugly filth, and unstoppable waves of hate pouring out of his creative orifices like so much hot lava. But then he’ll turn around and surprise you by demonstrating a strong command of subtlety, with cold ambient tones of understatement and ambiguity, brittle acoustic guitar samples, and clever dynamic shifts in the music. While most of these tunes are a bit shapeless, some of them do have an internal structure governing the direction in which they lurch, like crippled monsters; and on rare occasions there’s an interesting melody struggling to make itself understood, against the conflicting waves of negativity and growly noise. There’s also a lot to be said for his concision and compactness; most tracks here make their point (rather forcefully) in under four minutes, barring the epic ‘Sedentary Signals’ which ends the album. At all times Colossloth succeeds in presenting a warped, queasy view of the world, where no score is ever settled and every gesture conceals a lurking menace, an implied threat. Strong meat for ravenous wolves…from 23 November 2017.