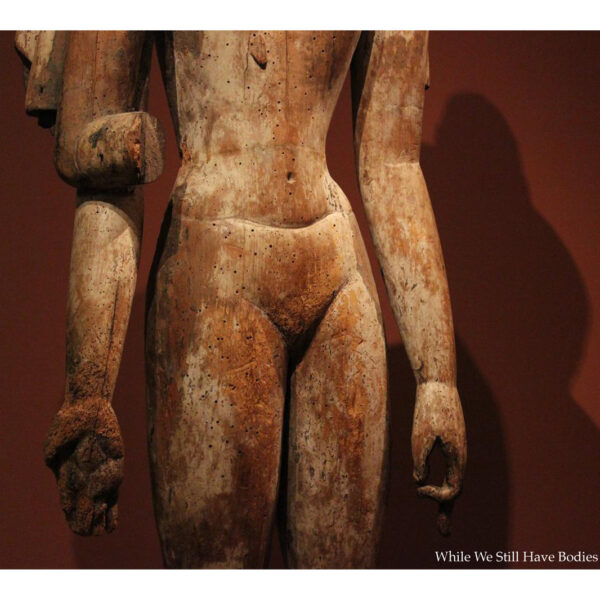 The eponymous record by While We Still Have Bodies is another excellent release from Carlo Costa’s label Neither Nor Records operating out of Brooklyn…players are Ben Gersten (trombone), Sean Ali (double bass), Michael Foster (saxophones) and Flin van Hemmen on percussion…Flin has surfaced before on the splendid Drums Of Days record which we heard in 2016. Today’s record (n/n 009) contains a single one-hour improvisation of quite mighty proportions, groaning, lurching, clattering along in a radical free/out experimental manner…offering a very full range of possible sonic experiences from the loud to the noisy, from the minimal to the maximal, no extremes left untouched…all four players add external / prepared / pre-recorded sounds to the situation, ensuring they all brought their cassette players, mp3 devices, radios and cell phones to the setup at the New Museum in NYC.

So lots of interesting digital / analogue electronic textures, effects and voices are collaged in, in the “classic” Keith Rowe / AMM manner…what’s exciting about the performance here is the manner in which it’s all done. The press notes speak of “raw and abstracted take on free jazz” and also allude to an “arcane ritualistic quality”. Raw is good, so is going through some form of ceremony…but there’s still something deeply wild about While We Still Have Bodies which I can’t quite pin down. There’s passion and vitality in the sounds / playing, nothing filtered through layers of smoothifying placebos or framed in a user-friendly presentation…everything is pushed out into the world stipped bare, unkempt, hair uncombed…some of it even has a shaggy coat, like a wild man from the woods. There’s a genuinely experimental series of actions at work here, bordering on the dangerous…the music is not belted out so fast as to spin out of control (mostly everything is quite slow and processional), but it feels like a giant entity that’s growing at an unexpected rate…a volunteer placed underneath a mad scientist’s acceleration ray…said entity now pushing the ceiling off the lab with broad shoulders and preparing to run amok in the city.

So at one level (a technical-ish level) we have a much more exciting update/spin on the much-vaunted “electro-acoustic improvisation” mode, and this time it doesn’t have to result in a mass of competing frequencies and over-charged “digitalised” air…recommend you install this upgrade now and restart your application…and at another level we have a scary interaction between four guys where the outcome is very far from being a known quantity, and they have to play it through just to even discover what they might be talking about. While We Still Have Bodies have been together since 2014. Apparently beginning as something rather casual, quickly growing into a shared musical “vision” underpinned by coherent ideas. There’s also a sense that egos and personalities have been subsumed within this plan, which sounds like it might be a good idea, in order to allow the music to grow the way it wants to.

And a closer look at the inside-wallet photo will give you some indication of their unconventional and imaginative approaches to music, where to some extent the rules appear to be jettisoned and the known world turned upside down. I guess this much just from the body language of the players, their stances. This particular project may have had its origins in the soundtrack to an art movie by the Chinese video artist Cheng Ran. This may all be marginal and little-known, but energised forces are on the move in New York, so look out. Another worthy addition to the small but select catalogue of Carlo Costa. From 29 December 2017.