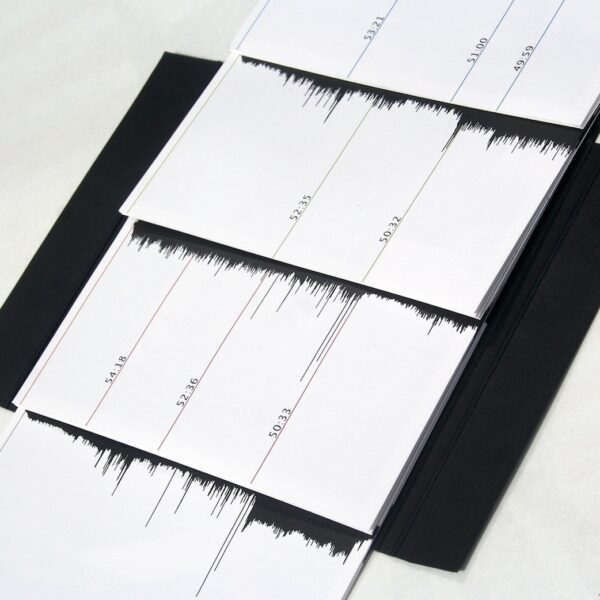 A fascinating audio documentation of three sound-walks the artists undertook in and around Göppingen between the 3rd and the 22nd of October 2016. The public were able to visit a sound installation in the Kunsthalle Göppingen over the same period. The artists took their recordings (each exactly the same duration) to the nearest audio editing suite and overlaid the three tracks.

Astrid Wegner is an artist who states her main interest as “…the exchange and transfer of information about different sign systems. In doing so, she not only examines the grammatical-verbal systems of language and text, but also incorporates the borderline areas of non-verbal, paralinguistic as well as musical and visual understanding into her work…” She has worked with the Schwindelfrei Theater Festival in Mannheim, xCoax in Glasgow and at the EUROMicrofest Festival for microtonal music. Ephraim Wegner has previous work released by Cronica, including a download album, Audible Landscapes, his piece “3024000” on sublabel Cronicaster, and his track “22.22” on the compilation siebzehn bis ? which also features Francisco López, Emmanuelle Mieville, Marc Behrens and Simon Whetham among others. Currently Ephraim teaches generative art and audiovisual media at the university in Offenburg. His performance practice “…ranges from improvisation (preferably using live input from instrumentalists) and notated works up to algorithmic compositions”.

Having introduced the disc to the living room hi-fi, “Exposition” initially presents some unprocessed city sounds before bubbling sonic artefacts opening up to inspection like a surfacing auditory submersible; throwing light on the unknown species of the deep. The sound is systematically broken up into all kinds of jetsam by way of various interesting engineering techniques and released into small pools of silence. Endless horizons of fractured sonic ephemera, floating – inexorably and irrevocably drawn, perhaps – toward a setting sun. But the Wegners cast their nets wide – “Position 2” employs a drone and then a church organ, played by Gerald Bu?, thus breaking the spell somewhat. The piece then devolves into a churning morass of static before coalescing into a magical sparkling Terry Riley-esque sustained chord. “Position 4” employs a higher pitched machine drone occasionally augmented by fluttering harmonics and crystal overtones like some kind of android throat singing.

Overall, a worthwhile trip into the unknown, perfect for a rainy afternoon indoors; much less dry or austere for something from such an academic background than I was expecting. The disc itself is housed in sumptuous packaging; a graphical representation of each waveform that make up the entire piece plus, I assume, a waveform of the finished piece are reproduced on the four concertina’ed paper inserts along with photographs presumably taken during the course of the sound-walk. The whole package is contained within a die-cut black fold-over sleeve. An edition of 500.