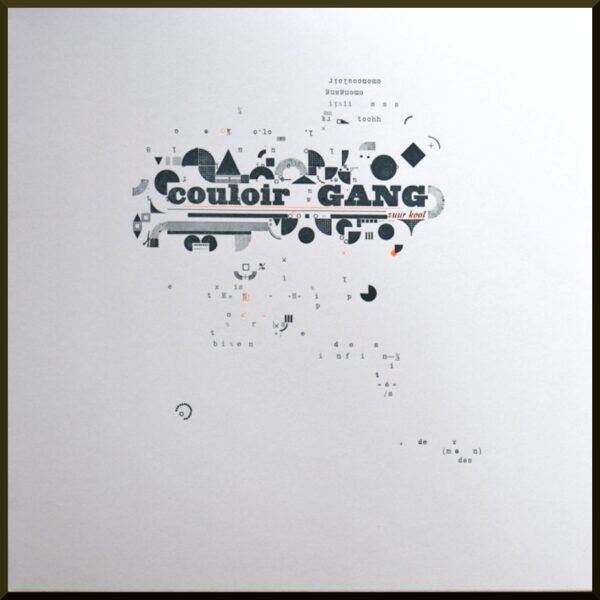 Five stars and a new floor polisher for this Couloir Gang LP Zuur Cool (SUARA PAPUA SUAP 08) …first spin just struck me as tremendous fun, a riotous and joyous explosion of beats, rock riffs, glitch, distortion, electro-pheep and barbling, with some nuggets of space-age pop and easy-listening samples ready to be prised loose out of the crumbly rubble (rubble made of nougat and caramel). These French players are Jean-Marcel Busson and Ravi Shardja (both associated with GOL)… Ravi Shardja has shown up in these non-curling pages before, firstly with his depressing Grün ist grau LP of industrial grimmitude, and also with a split cassette for KommaNull, where he contributed La Ferme Vous-Meme with its puzzling mix of samples, cut-ups and voices. I suppose Couloir Gang may be based on the same editing and sampling technique, but if so it disguises its footprints well, emerging as a highly spontaneous and raw-edged concoction a la mode, often appearing to be unspooling in real time on the floors of a dingy night-club on battered turntables and beer spillage around the ankles.

Couloir Gang is one way of saying “corridor” twice over, if you’re of the French persuasion, and these two have been hacking furniture together since 2014 when they bumped their appleflaps together in some shiny pink cafe in Belgium. They attribute their unique forward-moving sound to the drum machine, home-made electronic devices, heavy treatments and bass playing, and freely admit to having swallowed, digested and absorbed many bushels of musical influences. There’s a bunch of wonderful instrument credits printed on the back cover, including the magnetophone and lap steel guitar. The words “New Wave” appear on the press release, along with DIY (whatever that means in this context) and Kool And The Gang. Another nice touch is the typographical art on the cover executed by Jean-Marcel; I think it’s done using actual letterpress, which is rare – it endears me to it instantly, and is somewhat reminiscent of Dada magazine design crossed with concrete poetry experiments, like you might have seen in Revue OU.

Abrasive, messy, on the verge of chaos…but above all, to get back to my original impression, great fun. Recommended. From 20 November 2017.