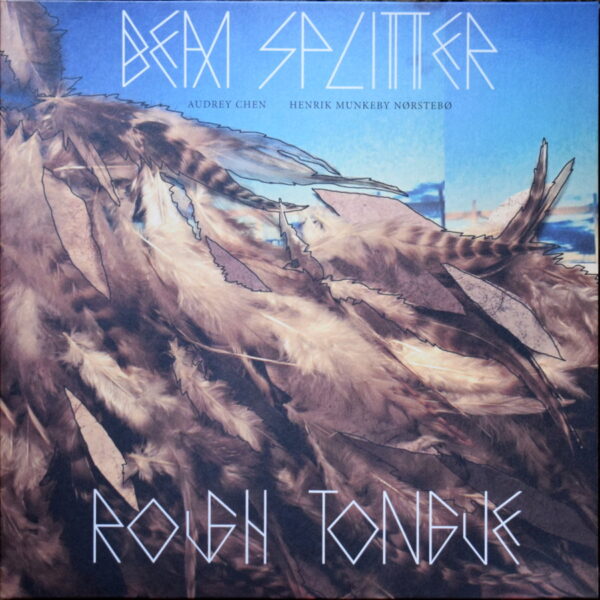 Latest item from “art label” Corvo Records in Berlin is Rough Tongue (CORVO core 013) by Beam Splitter…I say “art” referring to the presentation and packaging by label owner Wendelin Büchler, as he usually goes all-out to make something that’s both attractive and conceptually aligned with the content. Never any expense spared when it comes to picture discs, fold-out covers, full-colour printing and inserts. For Rough Tongue we have a gatefold sleeve framing an Audrey Chen collage and some bold typography that’s almost like runic letters…if printed in black you might think this was an extreme metal LP (not really). The inside photo spread of the musicians is somewhat more conventional, apart from the half-tone gradations and strong non-natural colours. Plus the record is pressed in red vinyl.

Rough Tongue is an improv LP mostly, but it’s also a collage LP – live performances have been recorded, selected, edited, spliced together – many precious moments distilled down into a concentrated listening experience. On side 1 this is expressed as 10 short tracks, bewildering enough with all the changes, while side two is a single 22-mins of ‘Sweet Nothings’, also I think a product of the editing / collage method. The two performers are Audrey Chen with her amplified voice, and the trombone of Henrik Munkeby Nørstebø. Norwegian puffer Nørstebø is well-known around here as a member of the excellent Lana Trio, who have been playing their own unique take on free jazz / free improvisation for many years; I often associate his playing with restraint, respect, contemplation…all good hallmarks which I think we can endorse. Audrey Chen may be more of a wild card…she added her voice to a record with Hans Grüsel and two others in 2010 which struck us as pretty far-out, creepy and strange, and played cello on the NCAT LP for Monotype Records. Today she’s all voice, though, exhibiting a form of guttural spitty alien speech that flies out of her enchanted mouth like a nastier version of Phil Minton’s mouth-actions. The rapid speed with which her inventions are concocted, released and dissipated in the ether is testament to a fervid brain, a restless soul, I would like to think; hence the usually stolid and unperturbed Henrik Munkeby Nørstebø attempts to remain level-headed and sensible, but soon he too is caught up in the general air of excitement.

Both players are amplified, which makes the music that shade more confrontational and gives the listener very little by way of a comfort zone or escape clause. Add to that the “wild card” of the edits and collages, and you can see why Rough Tongue is the kind of record which, on occasion, starts to undermine our sense of normality. The press notes, meanwhile, like to stress the two extremes which these players touch – from “two personas interwin[ing] seamlessly” to “the feeling of irrevocable fracture”. From integration to disintegration, in just 60 seconds. I suppose this might be making some observation about the forces of chaos and order at work in nature, or a more fundamental point about human beings who fail to get along and whose attempts at communication are fraught with misunderstandings and the words coming out wrong due to heightened emotional states. Chen and Nørstebø could be seen as actors, improvising their own script, as they take these demanding roles and work hard to express this eternal human dilemma. From 23 November 2017.