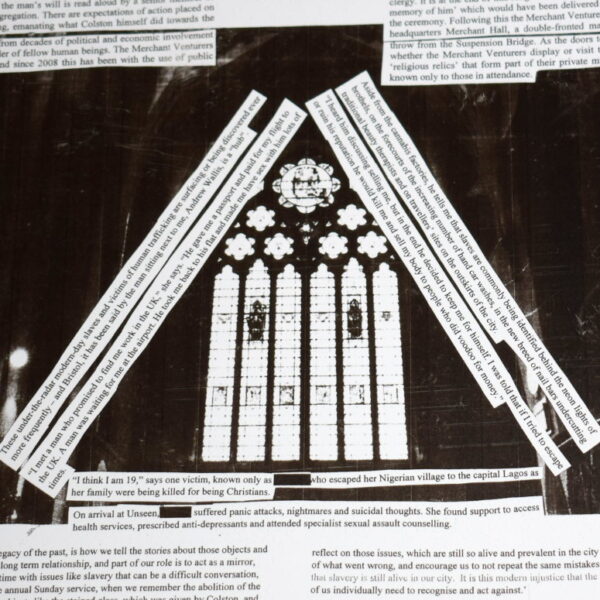 Bristol sound-artist Seth Cooke is no stranger to us, having been well represented on releases from LF Records and his own label Every Contact Leaves A Trace. Most of these have been process-based noise experiments, but often involved subtle manipulations of field recordings and percussion instruments, and what characterises his work for me is a sense of tough-mindedness, each sonic statement insisting on its own very challenging presence in the world. I’m encountering all of this, and further aspects of Cooke’s personality and ideas, on Triangular Trade (SUPPEDANEUM No. 15), a quite exceptional art statement released in America by Joseph Clayton Mills on his Suppedaneum Label. In the package is a CDR of puzzling and hard-to-process sound art, and several black-and-white photo prints covered with collages, texts, hints, clues, and jottings. The whole thing is intended as an attack on institutionalised racism, and from the press release which arrived with the package, I’m slowly putting together the detailed back-story putting it all in context.

I think it starts out with a film called Vertigo Sea, made in 2015 by the film-maker John Akomfrah. Akomfrah is an important UK film-maker who has been active since the early 1980s when he was a founder member of the Black Audio Film Collective, whose aim was to examine and articulate Black British identify using film, sound, and media; Handsworth Songs, which I have never seen, was a documentary about racial tensions in the UK and one of the first fruits of the Collective. Vertigo Sea, which I have also never seen, is a documentary about migration and a history of the transatlantic slave trade, directly attacking the exploitation of slave labour. (Anti-colonialism is deep in Akomfrah’s DNA.) Akomfrah had his film shown at the Venice Biennale in 2015, and later that year the Arnolfini gallery elected to exhibit the work. It’s a three-screen presentation and may shade into an art installation in some way; the Arnolfini does at least have some history as a repository of avant-garde films (I visited there myself in 1982 to avail myself of their library of structural-materialist cinema, for my Fine Art BA). For reasons that aren’t clear to me, the Arnolfini wanted a new soundtrack / score to the film, and asked Seth Cooke to provide one. Cooke soon made clear his objections to this “fundamentally bad idea”. Quite apart from the fact that Akomfrah is already a respected film-maker who certainly has no need of interference in his work nor the mechanics of its presentation, Cooke felt strongly that he would be “yet another white guy erasing a black guy’s work”, and was being pushed into this impossible position. But then he opened up the question even wider, to include the city of Bristol itself, and its own implication as an important historic port in the slave trade. Cooke’s view is that Bristol has never faced up to this inconvenient truth about its own history, and source of its wealth. Evidently incensed by the whole thing, he made the record Triangular Trade, an oblique yet penetrating critique of all the above issues, laced with anti-colonial sentiment; for good measure, he took on the Colston Hall, another Bristol institution whose hands are dirty with “imperialist culpability”.

These strong themes are expressed in the most roundabout way imaginable. Cooke starts out with a triangular structure for his compositional approach, to reference the triangular system of the slave trade; he created three site-specific recordings in Pero’s Bridge, positioned from three different locations, and these are combined with other elements, all arriving in threes – “three resonance recordings, three borrowed recordings, three instrumental parts, three no-input field recordings…” Even the diagram by which this “compositional shorthand” is given form is arranged in a triangular shape, like a piece of concrete poetry; there it is printed on one of the handouts. The words by themselves seem innocent enough on this graphical score, yet already there’s a sense of accusation lurking behind every stark word, a sense of factual truth which can’t be ignored. I’ve heard this quality in Cooke’s work before; my opinion on 2012’s Pneuma, for instance, is that it “just hangs in the air like an unyielding, brutal, fact”. Play the CD to hear the 45-minute suite of sounds created by the above method, including much minimal droning and scraping sometimes interrupted by harsh process noise. The tension is palpable; if nothing else Cooke has found a way to sublimate his evident anger at what he perceives as institutionalised racism. But the work also has a terrifying beauty; whether by default or design, it ends up sounding like crashing waves, in places, a stormy sea effect. And there is – I think – a short spoken-word sample from the Vertigo Sea film, which not only refers to the whole affair that started this project, but also gives the listener a contextual clue by which to navigate as they listen. Come to that we don’t lack for contextual clues, since as indicated Cooke has packaged this release with numerous A4-sized handouts printed in black and white, each a dense textual-image collage laden with fragmented references to Bristol and its role in the slave trade. This is where he gives both barrels to Colston Hall and its history, undermining any sense of civic pride Bristol may have in its past. Even the triangle motif resurfaces on one of these handouts, given Cooke’s free-spirited approach to cutting up lines of text and pasting them on the page. I feel like I’m back in the glory days of 1970s conceptual art, when artists like Richard Long issued compacted hard-to-decipher statements in the form of stark, black and white photos, maps, diagrams, and annotations. I should think that 30 mins spent in the company of Cooke’s enveloped inclusions – like an avant-garde Jackdaw, if anyone is old enough to remember those educational aids packaged in card wallets – would be sufficient to activate the enquiring mind in the direction of decoding the meaning of this work.

I might also want to note Cooke’s fleeting references to two instances of studio technique which I don’t fully understand, but they sound fascinating – one of them is the “erased structure” that he applied to the John Akomfrah sample, and the other is his treatment of a sample from a Mahavishnu Orchestra record, which has been “convolved 184 times”. I have no idea what either one means, but they both seem like they ought to be brilliant. This is another fine work from Seth Cooke, one which succeeds in conveying a lot of ideas and information through simple minimalist means and much compression of thought. From 7th December 2017.