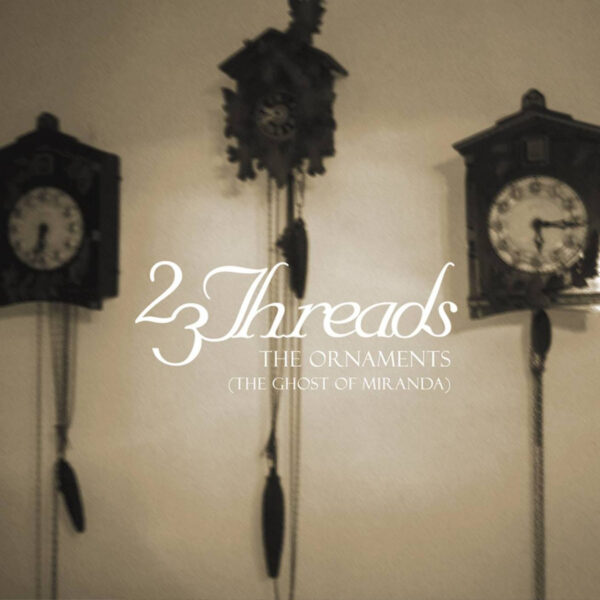 23Threads are everyone’s favourite spooked-out mystico death-cult band from Poland, often dressed and styled with a hint of goth in their makeup. Heard their rooster-killing special Conspicuous Unobstructed Path in 2015 where we were impressed by the instrumental prowess of Marek Marchoff and his henchmen, but enchanted (bewitched) by the presence of songstress Ingrid Dawn Swen, whose dagger-posing capabilities were on a par with her merciless vocalising techniques. This team present and correct on newie The Ornaments (The Ghost Of Miranda) (ZOHARUM ZOHAR 157-2), a strongly-themed set of songs and atmospheres structured in nine ‘Ghost Chapters’ identified with Roman numerals, in a tactic which may amount to a concept album of dark folk proportions. Plenty of sombre poetry, mesmerising acoustic guitar strums, echoed and whispered vocals, and heavy symbols draped around every lyrical phrase. Throughout, the tension and dread are palpable emotions, so thick you could put them in preserve jars and spread them on toast. Especially love that they recorded it in “Macabre Room”, which is either a great name to give your studio, or they really are the ghost-hunting spiritualists they would like us to think they are. Ingrid for one howls every syllable as if she was drenched with ectoplasm. The photos of some ghastly bedroom (with lace doilies, framed family portraits, candle holders and an owl) are a particularly good touch for those seeking reconnection with their Victorian roots. Twisted stuff. (18/01/2018)