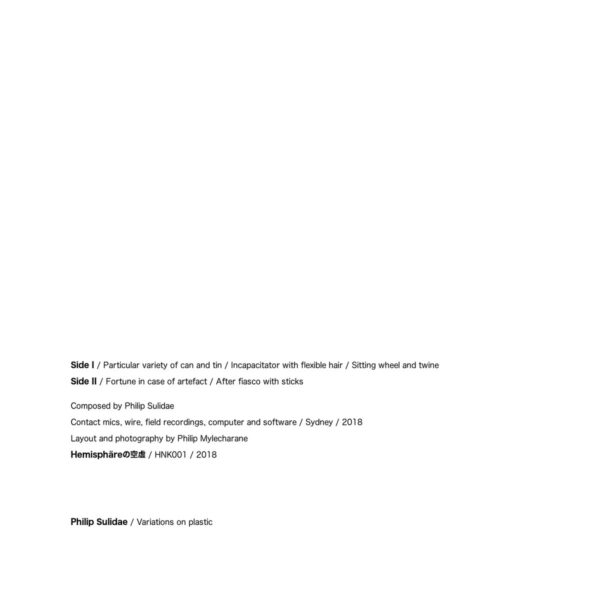 A Tale of Three Hemisphäre Tapes (with apologies to Lord Dunsany)

Recent welcome news has reached me that Sydney-based experimental musician Philip Sulidae now has his own cassette label Hemisphäre which already boasts quite a few releases, of which three have come under my inquisitive purview. As may be expected, these cassettes feature minimalist music of an experimental / improvisational nature, brimming with field recordings, digital noise, drone and atmosphere. Listening with headphones is recommended to get the full immersive effect and appreciate the full range of sounds that appear on each of these releases.

Made with wire, contact mics, computer and software, and field recordings of what seem to be common everyday noises around him, “Variations on Plastic” by Philip Sulidae is an intimate if very sparing work that encourages listeners to become more aware of their immediate surroundings and reflect on how they interact with their environments, how they are shaped by them and how they in turn shape their environments and perhaps influence other inhabitants (including other people) of those surrounds. This is a very busy recording bursting with stories of many secrets if listeners are prepared to take the time to hear them in full.

The only complaint I have with this work is that all tracks are so short, they couldn’t possibly reveal all they have to say – each track is a portal to a universe rich in mysterious worlds of cryptic languages, symbols and undeciphered scripts. Even something as commonplace as the sounds of someone trudging through wet fields seems to speak of a hidden missive. The longest track “Fortune in Case of Artefact” at 8+ minutes just whizzes by so quickly, so deeply absorbed are your senses in that track’s constant din of crisp pointillist noise, the machine drones that pass overhead and, encompassing the whole piece, the quietly bubbling atmosphere that keeps promising something new and very different from what’s come and gone before. Oh well, let’s soldier on … 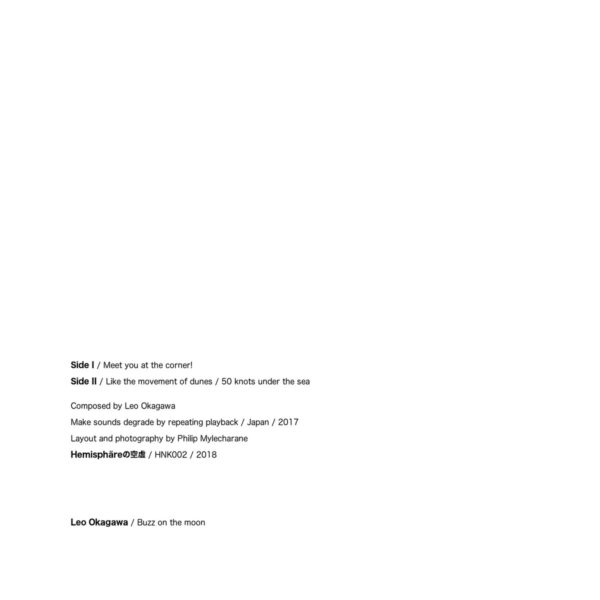 A buzzy cassette instead – the first track “Meet you at the Corner!” is a collage of droning buzz pieces stitched together one after the other like carriages following a steam engine. Even so, whether heard quietly or loudly, this track has a feeling of self-contained serenity even in its most “noisy” engine-puttering or factory machine lathe-threading moments. Subsequent tracks are not much different from the first and the wonder is that they were not all combined into the one piece in which nature-origin field recordings and those of environments created and shaped by humans are compared and contrasted as to their textures, any structural qualities they may have and the potential impact on listeners. 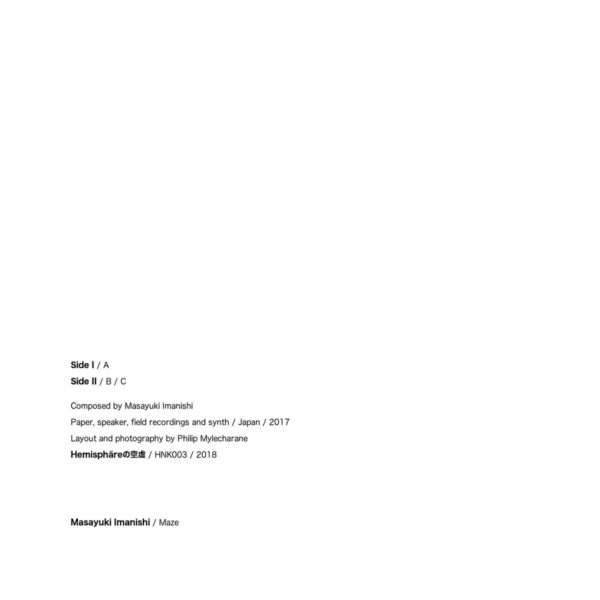 Compared to the other Hemisphäre tapes, the title of this recording by Masayuki Imanishi says very little and might suggest something rather dry, formal and very self-contained – but the actual work turns out to be dense and chaotic. Most of all, this recording collapses any barriers or categories separating the natural world from the anthropomorphic world as sounds generated by paper, synth, speakers and field recordings can’t always be distinguished from one another. Each of the three tracks offers something very different but all are rich and dense in the worlds they generate and the associations evoked by individual tones and noises.

In mood and atmosphere, “Maze” by far is the most disturbing of the three tapes, and indeed the nightmares found here – especially on the spine-tingling track “C” where bubbling electronic drones compete with crackle-dry whispering – are as menacing as any to be found in darker, horror-filled music genres. This is definitely a work not to be heard late at night on your own. Imanishi shows a lot of promise as a creator of inner sonic worlds and film directors needing a composer for music soundtracks should be beating a path to his door already.

Of the three releases from Philip Sulidae’s label, I much prefer Imanishi’s work to the others, with Sulidae’s own release not far behind. Overall, these recordings are a good trio to introduce a new label to listeners of electronic / noise / experimental / ambient sound art. Each cassette comes with a download code.