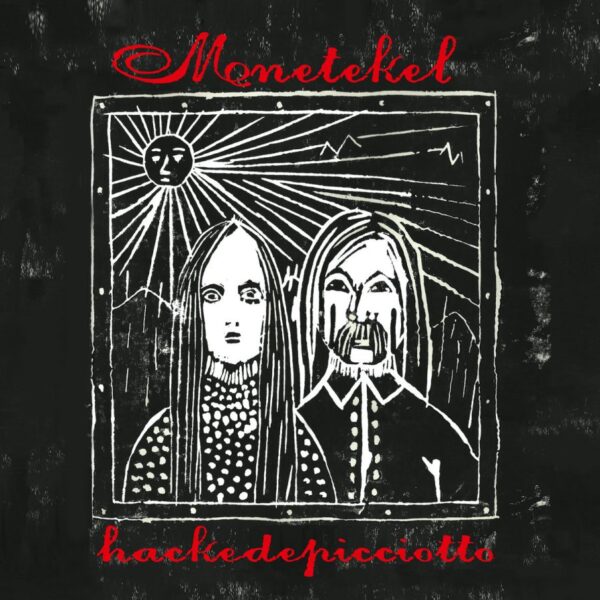 Looking at Menetekel‘s rather austere looking sleeve, I can’t help thinking that it’s some kind of woodcutter’s parody of Grant Wood’s enigmatic “American Gothic” painting; depicting a not right neighbourly, pitchfork-wielding homesteader and his vinegary-faced missus. And while not going flat out for the Amish ‘hooks over buttons’ life-choice, a more than significant slice of that back to the land feel is prevalent with this set, echoing its well-received precursor Perserverantia.

Long-time bassist with the Einstürzends, Alexander Hacke and his multi-instrumentalist other half Danielle de Picciotto (ex Space Cowboys, Ocean Club) have again fashioned a tonal spectrum where the age-old hurdy-gurdy, autoharp and kemençe (a bowed instrument of E. Mediterranean origin) merge with the more contemporary bass guitar, percussives, stray metallics and field recordings. But mark ye well, an awkward clash of time/culture(s) is nowhere to be found as instead, all of these vital ingredients seamlessly converge to form a particularly unforgiving and parched landscape. Vultures wheeling in a cloudless sky, cattle skulls, tumblin’ tumbleweeds… the whole shebang. Following on from the misleading “All are Welcome” with its sugary sweet unison vocalese, things change soon after.”Dreamcatcher” comes on as bleak and as sparse as a classic Morricone’d spaghetti western score. Though the inclusion of Alexander’s Tuvan-referenced throat-singing gurgle does eventually wrench it from the commonplace and the clichéd. The duo’s solitary guest Richard Klammer’s multi-overdubbed trumpet and trombone blare meanwhile, could only ever appear on a track called “Jericho” Some things are just meant to be!

“Pilgrims” finds Danielle’s violin enveloped by just enough reassuring crackle and dust-on-the-needle f.x. to suggest fleeting images of a time-travelling Carolanne Pegg (of Mr. Fox) doing the old bow’n’scrape routine on an early wax cylinder experiment. And with its melancholic/affecting vocal swoon resembling a dustbowl-era Nancy and Lee “The Long Way Home” takes on an autobiographical aspect. “We were two weary travellers and there was no way back…” refers to the couple’s world touring regime, now in its eighth year since they upped sticks from their Berlin home. The hope of discovering an artistic haven similar to the one the city had back in the nineteen-eighties being paramount in their thoughts. Let’s hope they’re successful in their quest.

Also available in c.d. format, but the more astute shoppers amongst us will obviously choose the vinyl edition, as that includes a twenty-minute installation piece that was composed/recorded at the charmingly named Klangraum Minoritenkirsche, Krems an der Donau, Austria.