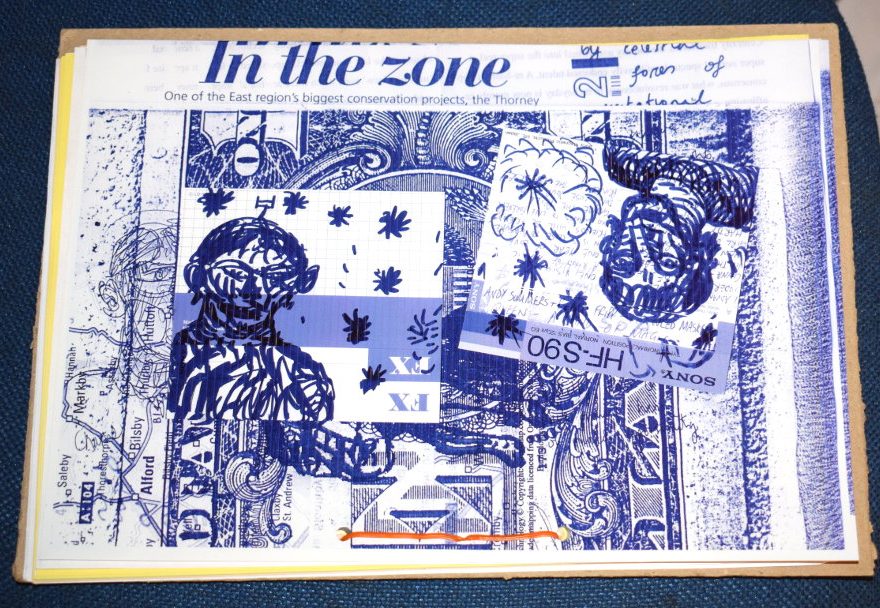 We’ve been receiving (and ignoring) cassettes from the English fellow Tape Noise for some time now. His latest missive is not a tape at all, but a book of texts and images which arrived in a decorated envelope along with an insert which makes a play on words about On-Off and One-Off, the latter referring perhaps to the size of the edition of this printed statement. Inside we see doodles, scrawls, photocopies of cassettes and their covers…and printouts from web pages. The pages indicate that there is (or was) a limited run of five tapes available as part of this project, but I’m not sure we ever received one here at TSP. In the texts, Tape Noise asks many searching questions about music, noise, culture, politics and society; he’s also trying to get behind the purpose and the value of the cassette tape itself, freely acknowledging its obsolescence while still insisting on his own agenda. The crowning touch is the back cover, a tatty piece of cardboard rescued from an old A4 writing pad, on which is sellotaped a portion of a cassette tape. I have no idea what any of this means, but a lot of the notions here feel like diluted and half-digested versions of ideas already explored many times over in 20th-century avant-garde and conceptual art. His messages are blunted by over-much jargon in the writing, and an obtuse font selection that makes the text hard to read. From 12th January 2018.