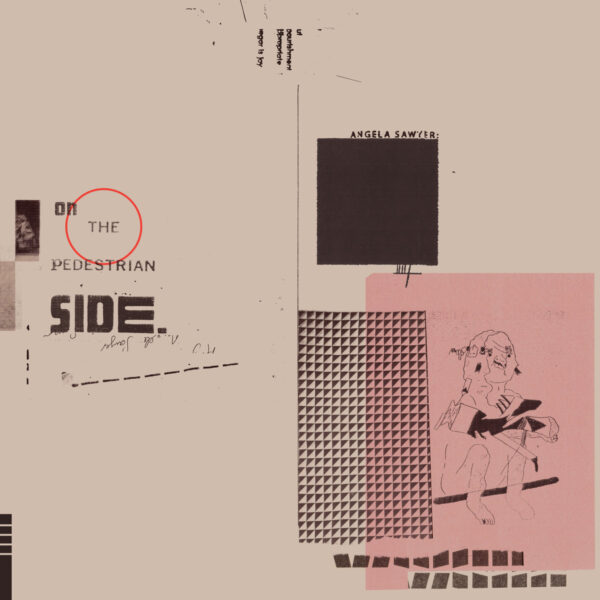 Oddball release of the month from Angela Sawyer…her On The Pedestrian Side (FEEDING TUBE RECORDS FTR282 / WEIRD EAR RECORDS WER-012) album is jointly released by Feeding Tube Records and Weird Ear, the former a label evidently trying to outdo itself in giving a home to marginal eccentrics, if this item and the recent Chik White LP are benchmarks of their current policy. Of course in our ideal world these enlightened souls would not be marginal, but given positions of influence and state support…

Angela is a gifted singer and musician in the Boston area and here are 11 unusual songs, all providing evidence of her astonishing ultra-soprano voice, her off-kilter instrumental skills, and her strange imagination. Her singing voice will be the first fence at which some listeners will falter, and if within 20 seconds you are not won over by her squeaky Minnie Mouse on helium vocal style, you’ll know that the world of Sawyer is not for you. For those that remain, prepare to enter an interesting multi-verse of ideas, tunes, and songcraft…Byron Coley compares her to Tiny Tim in his press notes, more than once claiming Angela Sawyer as the natural heir to this all-American individual, not just because of the high voice but also because of the knowledge of songwriting history. Not every song by Angela here is a cover version, but her rendition of ‘Will There Be Yodeling In Heaven’ is evidence enough for me of her studious understanding of the sweet chord structures, bordering on the corny, so beloved of our 19th century ancestors when popular song was a parlour speciality for all the family and a player piano was a necessary adjunct to the furnishings of the home.

This may be a red herring though, as most of the album is more in the confessional, lone-voice mode used so well by everyone from Syd Barrett to Daniel Johnston and Leonard Cohen. Sawyer’s own annotations on the songs are fascinating…and how wide-ranging a selection…one song from a 1973 Bollywood musical, a cover version from local pop band One Happy Island, a song written by Milo Jones (another local songwriter) about Palestine…‘Run Angel Run’ was scored for Tammy Wynette by Stu Phillips, whom Sawyer describes as “one of those secret music masters without whom America would be a much worse place”, and it’s good to see and hear this very contemporary update on American country music which does much to honour the intentions of Phillips (I would assume) and makes me think one day we could be regarding Angela Sawyer as the next Eugene Chadbourne, if she keeps this up.

There’s a lot more to her written annotations I wish I could share with you – generally, she takes ideas from songs as springboards, combining them with ideas from her own experience, her reading, her understanding of philosophy…and although there’s lots of good humour, there’s an edge here too which I can’t quite identify. More than feminism, beyond politics…she seems to be on a quest seeking underlying patterns to things, trying to piece them together. Whether this comes from the history of popular song or other sources, it’s all one to her. See what you make of her own account of ‘The Knife I Carry’: “I tried deliberately crossing Charlie Gocher’s thoughts about killers and their cutlery with the theme from ‘The Love Boat’.” Besides the sheer genius of that combination, there’s a directness and honesty about her artistic process, which I like. You’ll find that candour in the performances too; sparse instrumentation (including samplers, ukulele, and midi keyboards), odd arrangements, a familiarity with many musical styles…emerging in places as post-New Wave DIY mixed with folk and easy-listening elements. One song simply writes a new tune over the top of an existing Bossa Nova melody, and lets the listener make of it what they will.

Her music is just one side to Angela Sawyer’s personality and achievements; a quick browse of her website reveals she also does stand-up comedy, hosts open mic nights, and is responsible for a monthly event called The Weird And The Beard Variety Hour. A real charmer and very endearing…from 17th January 2018.