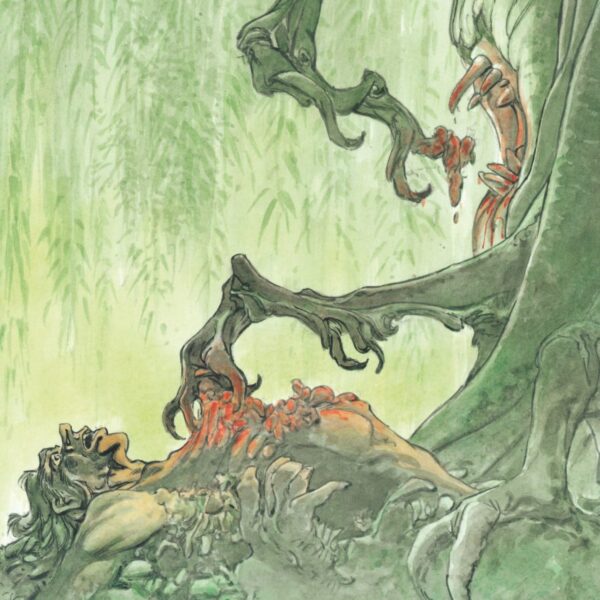 Mein Freund Der Baum (WIDE EAR RECORDS WER032) is a fine set of spiky and restless improv music from Flo Stoffner with Paul Lovens and Rudi Mahall. Guitar-drums-bass clarinet pitching in and throwing down every which way on these four long pieces recorded in 2016 in Zurich and Lisbon. More than once as music unspooled I thought of Derek Bailey with Han Bennink joined by an additional impolite woodwind puffer (someone less frantic than Brötzmann, less zany than Alex Ward), so perhaps in some ways this record harks back to a time when free improvisation had more fire, spirit and engaging qualities than the ultra-polite murmurings that prevail today. For this, I give credit to Flo Stoffner, a man who is likely capable of slipping a bee or two under the hide of any given rhinoceros, given his intricate and complex means of zanging out a solid belt from the strings of his axe. If spiders could spin webs of steel, that would be a Stoffner guitar solo. Check out his other hit faves for the Veto Records and Wide Ear Records labels in Switzerland, and you’ll soon learn why they all call him the “Richard Fiedler of the Alps”.

Rudi Mahall is good too, even though I’d love to hear more lower-register burrs and grunts from his black stick instead of the jaunty devil-may-care tunes he tootles as he strolls down the Bahnhofstrasse dressed in his crimson opera cape and twirling his cane. To be fair, he’s also capable of vomiting out a hearty scream or screech as robust as any Highland chicken, so he may be the merry counterpoint to Flo’s barbs and prickly sentiments. This German veteran has been puffing with aplomb for many moons, appearing on records since 1995. Even more a veteran of the improv tempests is Lovens, who’s drummed with Bailey, Cecil Taylor, Eugene Chadbourne, Paul Rutherford, Evan Parker and dozens of other greats, and has a discography going back 40 years. Here he’s a model of poised restraint and yet a fount of ceaseless energy, setting forth compacted pockets of percussive power that conceal more than they reveal. No need for him to press too hard on the bass-drum pedal to bring in a thumping pound if the energy levels are sagging (as many lesser drummers tend to do these days, when asked to supply “energy music” in a vague free jazz vein). Instead, taut rattles and precise patterings deliver just the right amount of propulsive power for the two soloists to fly.

Well, score 18 out of a possible 10 for the wild music. This leaves us with the unusual choice of cover art, a which looks to be a detail from a painting by Hermann Huppen, the Belgian comic artist who was an early contributor to Spirou magazine and a major figure in the Franco-Belgian school of bandes dessinées. The image here depicts a tree coming to life and apparently devouring the intestines of an unfortunate man who is lying prone at his roots. This might be taken as a metaphor for improvised music (all music), the way it feeds on its audience not just to stay alive, but simply to stay in one place; the tree has grown long sharp teeth for the task, a dental aberration that also afflicts many free improvisers. However, the musicians freely admit that this Huppen image is “an unauthorised reproduction” and the Belgian hero gave no permission to have his art associated with the musical genre. Inside are printed two quotes from historical documents (neither of them adequately cited), which might be intended as a sideways look at the music world. One of them is from a recipe for a bread tart in Austria. Huh. Lastly there is the use of Barmeno font for the release, designed by yet another free improviser Hans Reichel. From 2nd February 2018.