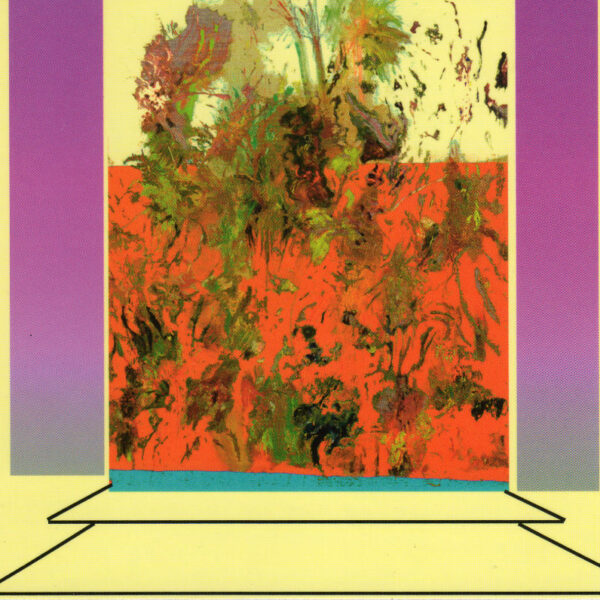 Unusual record by Laura Steenberge…forward-thinking and in a class of her own, this West Coast US composer is a talented multi-instrumentalist and composer, and a singer…has ideas about music and language, and has composed a lot of pieces for the voice…plays unusual instruments such as the viola da gamba and the contrabass (though also the piano)…say all this as preface to Harmonica Fables (NUENI RECS. #007), an entire album composed for the harmonica. How many modern compositions have been scored for that instrument? To be accurate Harmonica Fables is harmonica plus voice, all performed by Steenberge, and her vocal moanings and murmurings are a large part of the work that we will hear.

I suppose the two front-loaded pieces might be considered the keystones to this particular pyramid of ideas…the first one is titled ‘Ritual For Harmonica’, and it’s a slow and contemplative drone piece of low harmonica notes and breathy voice tones, which somehow seems to encapsulate many forms of devotional and religious music, from Gregorian chants to Tibetan monks singing and blowing their bones…by way of early man sitting around a campfire and slowly evolving their vocal sounds into the first manifestations of language. “Ritual and metaphors of the supernatural” are among the themes that interest Steenberge, and right out of the block we have a piece that might just touch on these metaphysical dimensions. The second piece is ‘Chant – Harmonica’, somewhat more aggressive and not so clearly situated in the contemplative realms of quiet spirituality, this is one where she’s pressing her mouth and entire body into that metal fretboard and coaxing whatever nuggets of esoteric knowledge she can into the ether…with her fascinating “sing as you blow” technique, we’ve got a thrilling audio sensation as vocal humming blends into the harmonica wheeze, and the makings of another new language seep forth.

So far, a powerful 32 mins of music to carry out healthy day-dreaming and inspired musings to…two shorter suites follow. Going by typography of layout in cover (related items grouped by spacing, and colour), and by the titles, evidently we are expected to treat ‘Spheres 1-3’ as a set of connected ideas…these three miniatures explore what can be done with the higher notes of the instrument, and she gets a potent squealing eeriness with mixed chords and celestial tones that Pauline Oliveros woulda loved. Lastly, four pieces that really are “fables” as promised by the album title. Stories from myth/literature old and new that stir the imagination and rattle the bones…these are recast as tales told in music…to do justice to the tales of Rip Van Winkle, The Lady of Shallott and Pan and Apollo, Laura Steenberge departs from the steady droning technique and exhibits great invention with her trills, scales, intervals and melodic will-o-the-wisps…doing things previously thought impossible on the harmonica.

Without knowing anything else about her work, I’d say this is a clear example of how the power of the ideas and the compositional requirements can really drive a musician/player to new heights of achievement. To put it another way, when you need to you can move mountains with a flick of the little finger. With abstract painting artworks by Ander Sagastiberri Fernández, this is another distinctive entry in the Nueni catalogue, run by Héctor Rey in Bilbao. From 1st February 2018.