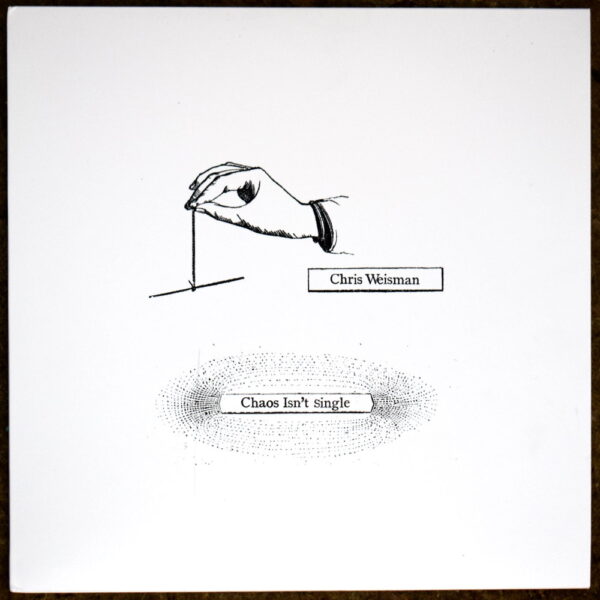 Latest LP of songs by Chris Weisman is called Chaos Isn’t Single (FEEDING TUBE RECORDS FTR341), and it’s a reissue of an earlier CDR on another label …we last heard from this American (Battleboro, VT) non-mainstream performer with his 2012 double LP Fresh Sip, which was originally a 2010 cassette and repressed in vinyl form by this label, who clearly support Weisman. Indeed this is the 8th LP of his they’ve put out. Evidently I enjoyed the wispy acoustic DIY qualities of Fresh Sip, and noted with approval that Weisman wasn’t trying to out-weird the listener in any way. Conversely with Chaos Isn’t Single, I started off the day’s listening grumbling to myself that it wasn’t weird enough, but this impression was soon dispelled. Weisman delivers 13 songs, mostly based around the acoustic guitar and his fey singing voice, though some tunes are decorated with very light musical backdrops and touches (recorder, organ, bass guitar, percussion). For the most part I was struck by the very plain delivery, and very plain recording style; Weisman creates songs as though Punk, New Wave and SST Records never even happened, passing directly from 1974 to the 21st century using whatever singer-songwriters are appropriate as milestones along the way. I was also struck by how unhurried is his delivery, when playing or singing; none of that post-modern rage or confusion for him, as he reflects on his observations of the world and sounds genuinely bemused by what he sees.

Weisman often sings of disappointments and disillusion, but not in an especially self-pitying way. He seems to be seeking meaning behind the sting of everyday pain. His song lyrics follow a slightly disjointed diary style, filled with strange details of a highly personal nature. Stories are barely sketched in; emotions and abstractions drift about the landscape. I won’t say he uses symbols, but some of the songs have eye-catching physical details that are just plain odd. You can’t work out if these images are profound or banal, and it’s not always clear why they matter to him. ‘Open Up The Ground’ is one example, with its fleeting images of stairs to the attic, a coffee cup, a day in the office; this one intrigued me as it seemed to finish up with the creator “erasing himself” in some way, as if his soul were being pushed to the background by the over-crowded world of things, to the point where he just fades away. Maybe that’s the key to the whole album. ‘A Fun Way To Walk At Night’ also contains a string of vaguely unusual images, again disconnected, as though the writer were just jotting down whatever presents itself in his pathway as he ambles along. However, this particular nocturne has traces of unsettling undercurrents too, and while not exactly as troubled as Jandek, it’s about as dark as Chris Weisman gets. I also found myself raising an eyebrow to some of the lines on ‘Han-Shan’, with its “birch bark hat” and the way the “cold mountain sets off the alarm”. There’s an oddness here I can savour, for sure.

On the early tracks on Side A, more grumbles emerged from my “inner critic” (who can be a very bad-tempered creature) complaining that the melodies were not very inventive, rarely straying outside the obvious patterns suggested by the two or three chord structures. And some of those chords seemed too “tasteful” to Old Grouchy. Things improved towards the end of the side though, with ‘On Your Sleeve’ and ‘It Feels Good To Sing’, where by accident or design our creator manages to devise some very unexpected intervals in his tunes. Maybe the subject matter drives him to exert himself. ‘On Your Sleeve’ breaks down into one of the oddest endings to a song that’s yet been cast onto tape; the image of the blade, which crops up in this song with a rather menacing finality, is repeated as a single word which the singer moans with a mixture of terror, resignation, and grim humour: “blaaa-de!”, as if paying homage to Patty Waters and her famed delivery of the single word “blaaacck”. The first three songs on Side B also have very unusual tunes, and their more opaque imagery suggest to me that this side is the one to turn to if you want other-worldly glimpses of mystery and strangeness. This trend on the album hits its peak with ‘The Illusion Of A Group’, an oddity more poem than song, with a bleak organ drone and two voices arguing in opposition, one of them treated in the studio to sound more hostile and weird.

“Crafting pop tunes worthy of any sophisticated pen you can name, from Nilsson to Beck” is Byron Coley’s claim in the press pack. “A thinking person’s alternative to lots of stuff”. From 3rd January 2018, limited to 300 copies.