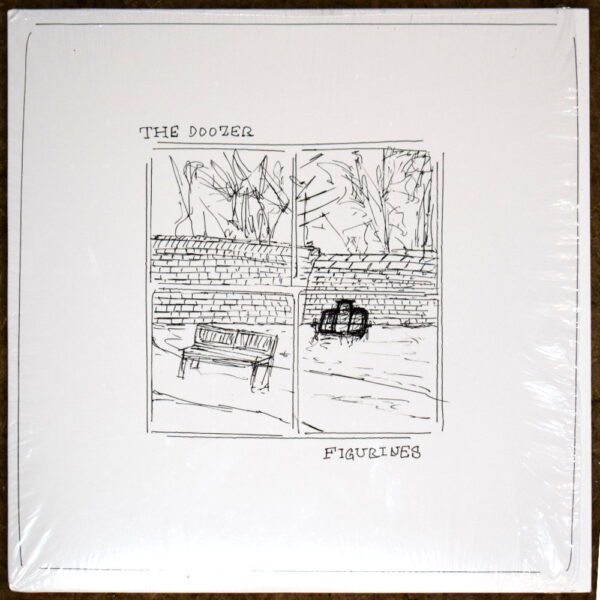 The Doozer is Simon Loynes, an English performer who is a friend of C. Joynes and may sometimes be considered part of a loose Cambridge “scene” (Nick Jonah Davis is another name in that bag) connected by nothing more than a love of acoustic guitars, songcraft, and a straightforward honesty in their playing. Here he is with an LP for the American label Feeding Tube Records, who incidentally seem to be in the middle of a song-based patch at the moment – given fine recent releases from Meadow House, Angela Sawyer, and Chris Wiesman. On Figurines (FTR360), Loynes is accompanied by Ben Kingsbury who acts as low-key rhythm section, adding bass, drums and keyboards as needed. These instrumental backdrops are very pleasant and many of the songs lilt up and down like a wooden horse on an old fairground ride. Not that Simon himself is the opposite of low-key; none of these songs are particularly demonstrative, and he tackles everything at the same pace, in the same register; one criticism might be that Figurines is a rather samey LP.

A first impression of this LP was that of Byrds-influenced jangly-guitar tunes (though not quite as obvious as those awful C86 bands such as The Pastels), except heavily slowed down and delivered in an impeccably precise, English manner, both in the singing and the strumming, every phrase landing “just so”. Then it reminded me of The Tindersticks, whose 1993 self-titled album I soon disposed of after growing unsatisfied with its deadpan tone, its forced irony, its swallowed emotions…maybe there’s a trace of that here, Loynes deliberately presenting every song with a rather constrained expression. Not that I’m capable of deciphering the lyrics, which are brilliantly evasive. Loynes has a gift for compacting poetic statements into deceptively ordinary phrases and song construction, not calling attention to his verbal skills at all. I liked ‘Cricketing Men’ which clicks into place as a kind of obverse take on the Kinks and their village green preservation society; in The Doozer’s world, this cricket game has a sour atmosphere, despite the vicar and his green grass, and the winner of the game (if there is one) goes home empty-handed. I also liked ‘Oh Mary’, which contains an ambiguous verse about Mary and Joseph, and hence could almost have been sung by c. 1972 Richard Thompson. If only Loynes could bring himself to add an extra twist of darkness to the lyric.

In all, there’s some superlative songcraft going on here, and the songs have concision and economy, but the performances are a bit lacklustre, under-nourished; but perhaps that is Loynes’ style, contributing to his general aesthetic of drabness and disillusion. From 3rd January 2017.