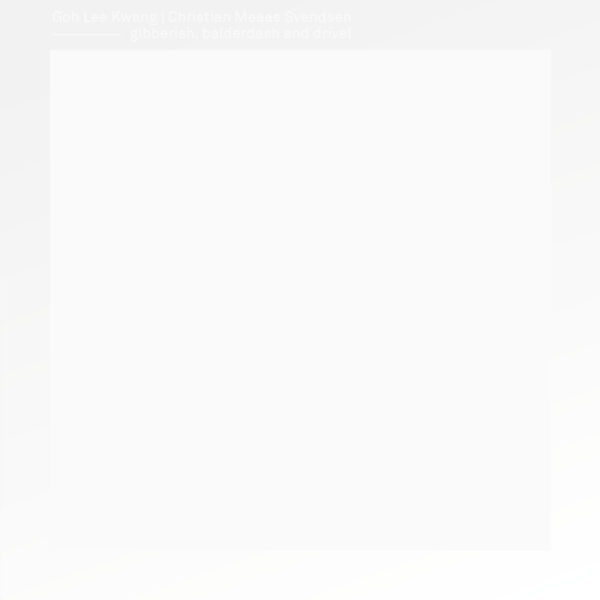 Quite often when trying to appraise or account for improvised music, we can tend to fall back on describing it as a “musical conversation”. This woolly concept can mean almost anything, but I suppose the optimal position is that two great musicians meet up and, through their respective playing styles and musical history, successfully communicate with another and illuminate a range of topics with their insights and intelligence. You probably have your own benchmarks of success in this area; one high watermark we could point to would be when Derek Bailey and Anthony Braxton played together, for all sorts of reasons (improv / jazz, UK / USA, white English / Afro-American…)

On the record Gibberish, Balderdash and Drivel (NAKAMA RECORDS NKM014) two players attempt to hold a musical conversation. By their own admission, it was a failed attempt. Hence the title, and the slightly tongue-in-cheek press release which documents the meeting between the Malaysian guitarist Goh Lee Kwang and the Norwegian bass player Christian Meaas Svendsen. The record is sold to us as a clash between countries, nationalities, age differences, and languages; the idea that music is somehow going to transcend these boundaries is shown to be a forlorn hope, and just wishful thinking on our part. Kwang is an unusual fellow, more known in these parts for his bizarre sound-art experiment _, And Vice Versa which he released on his own Herbal International label, and was more of a minimal-glitch-electronica statement than what we hear today, which is some very fluid doodling and nimble linework with the nylon guitar. What I can hear of his playing here sounds very interesting, but it’s often obscured and written-over by the deeper bass sounds, thwacks and cracks and grumbling remarks from the Norwegian half of the act. I can see why the bass thinks it’s got to keep the conversation – that word again – moving along, but he seems to be sucking all the air out of the room. If we could just get five minutes alone with Kwang, I’m sure a little more clarity would enter the situation as surely as opening a window to let in some sunlight.

So far I seem to be confirming one of the main “failure” aspects of Gibberish, Balderdash and Drivel, but on the contrary it is probably more of a success than might be supposed. The main elements that tick the scorecard are (a) they keep on playing, even though there’s no common tongue; and if you want non-stop playing, instead of precious noodling filled with overly-polite hems and haws and hesitations, this record satisfies; (b) neither player has an agenda to follow, something the press notes laud as “a dialogue of no-intention”; far from trying to address the big topics, they just babble on about any old thing they can think of, no matter how insignificant. All things considered, I can see now why the record has a near-blank cover (there’s a thin layer of transparent gloss ink and the title is printed in microscopic text), and why there’s nothing printed on the CD artwork either (twice now I have put it in the player upside-down as a result. Gaaah.) The conclusions to be drawn are that there’s no point whatsoever in trying to make sense of the world. Perhaps a better, simpler title for the album would have been “nonsense”. P.S. I forgot to recap Svendsen’s credentials, but you should know his work already, and the last Nakama record also had some “point” to make about “modern life”. From 19th February 2018.