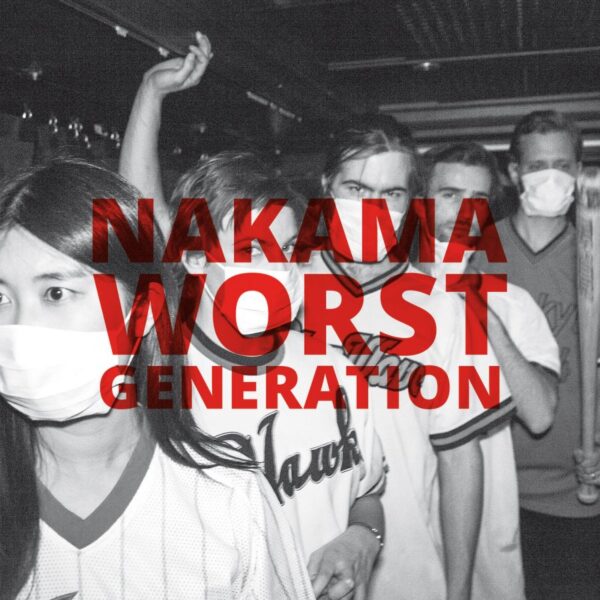 Norwegian bassist Christian Meaas Svendsen is the fellow behind Nakama Records in Norway – more than just running a label, he seems to be trying (in a low-key way) to promote a philosophy of music, a way of working that requires mutual respect (or comradeship) between players. Nakama now appears to be an actual band of the same name, at least it is for today’s offering Worst Generation (NAKAMA RECORDS NKM013CD) created by five players including vocalist Agnes Hvizdalek, violin player Adrian Loseth Waade, pianist Ayumi Tanaka, drummer Andreas Wildhagen, and Svendsen on bass. As you may recall we very much enjoyed the intense and very personal Index record made by Agnes H. and released in March 2017. But this is not a solo voice record, it’s a group improvisation record, very much so. Nakama as a group have toured Europe in 2017 and made this record while on tour – part of a “live concert in the studio” according to the press.

Of the Nakama releases heard in these quarters (they are all of interest, so far) this one seems most clearly to manifest the intent of “shared respect” which Svendsen aims to cultivate. No single sound dominates, no player is showcased as a star, no ego-gratifying workouts in sight (the concept of “taking a solo” has been banished to the archaic world of 20th-century jazz, evidently). The way that the group sound is so completely integrated is impressive; it gives the sense of an acoustic machine, all parts moving in harmony, at no expense to the dynamism or energy of the music. Quite a rare commodity in today’s over-crowded music world…if group dynamics don’t appeal to you, the creaky and rattly acoustic sound is sure to please; a welcome antidote from digital / synthesized music, from the artifice of the laptop, as once again we’re back with the way that instruments actually sound when played by human beings. It’s largely abstract in nature, yet without resulting in the cold and alienating vibe we sometimes get from those players who concentrate too closely on “extended technique” 1.

All of this makes for a compelling listen. What we must add to the elements totalled up so far is the underpinning sense of melancholy, tension, and severity; all the tunes sound like they have something to complain about, a target that deserves a critical barb. Well, the target in question appears to be society itself. Whoever came up with the concept – the same person may have written the press release, which is 99% an extended rant about the successive failures of one generation after another – has turned a pessimistic eye on the state of the world and concludes that “in today’s western world there still lives a total of five historically distinguishable generations”. The five pieces here are named after these generations, starting with ‘The Lucky Few’ and going to ‘Plurals’ by way of ‘Baby Boomers’, ‘Gen X’ and ‘Millennials’. Personally I find these pseudo-sociological tags are far too much of a sweeping generalisation, and it’s surprising to find them deployed in this context, but there may be a grain of truth here somewhere. The underlying trend of this album’s argument is that we keep getting it wrong, and that there is a noticeable slide in societal behaviour – as reflected in today’s bad manners and contempt for authority as exhibited by the younger generation. 2 It’s quite poignant that Socrates was saying the exact same thing in Ancient Greece, which I think indicates that as a society we just keep making the same banal observations over and over again, and that the problem (if indeed there is one) is nothing to do with generations, and everything to do with the intractability of human nature. Regardless of the rather simplistic argument, the record is a strong piece of modern contemporary music which I recommend. (07/11/2017)