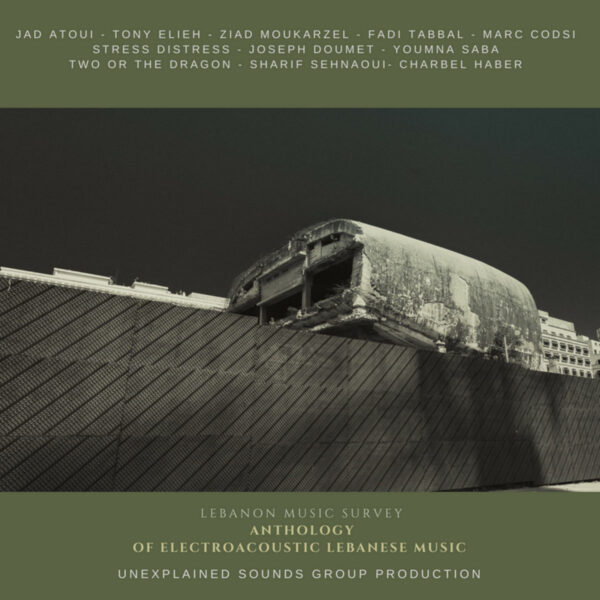 For such a small country, dominated by its capital Beirut, and with such a fractured history as it has had since its independence in 1943 – a history that includes 15 years of civil war (1975 – 1990) and invasion and occupation by neighbouring countries – the wonder is that Lebanon now sustains a thriving arts and music scene, and especially one interested in alternative and experimental forms and genres of art and music. This anthology of experimental electroacoustic music by Lebanese artists, nearly all of them based in Beirut, is a snapshot of the scene as it currently exists – and an amazing and bubbling creative scene it must be, if this music represents a wide range of artists and the styles they favour. Many tracks here do sound a little similar but I’d say that’s because most artists featured either live in Beirut (and many of them have grown up there) or have migrated to Beirut to seek creative opportunities and find contacts otherwise unavailable in their own towns and communities; naturally they all find one another and share ideas and help one another out. The anthology, released both digitally and on CD digipak by Unexplained Sounds Group, covers some 80+ minutes of often passionate, emotional and energetic music that pushes at the extremes of its sonic and emotional range; the digital release adds nine bonus digital tracks that together add at least another 70 minutes and could constitute Part 2 of the anthology if the album were to be reissued.

Admittedly many tracks can be repetitive, or on the other hand are so dense in texture, sonic dynamics and mood that repeated hearings are needed to fully appreciate them all. Early tracks like Tony Elieh’s “It’s good to die every now and then” – yes, Mr Elieh, I could die over and over just listening to this piece of sustained shrieking drone and heavy pulsing rhythms – and Two or the Dragon’s barking, wailing force of nature “Prelude for the Triumphant Man” set a high standard for what is to come on this epic sonic adventure. Marc Codsi’s “Lies a turbulent thought” shines concentrated beams of blaring desert sunlight deep into the darkest recesses of a mind set deep in a subterranean universe where no light has shone for millions of years. This is a deeply dramatic and intensely emotional piece of blazing keyboard wash drone.

From such an auspicious start, I’ll pick on those tracks (because there are so many) that appeal to me the most. Stress Distress gives us “The Jetty”, a hovering instrumental drone ambient piece, mighty and majestic in sound, and deeply affecting in its intensity and ability to command full attention from listeners. Although not one of the longest tracks, once it’s in the brain it just pushes out in all directions and your consciousness all but expands with it. In this new awareness comes singer-songwriter Youmna Saba’s relaxing and refreshing “Nafas”, combining soulful vocals influenced by classical Arabic vocal music of the 20th century with acoustic oud melodies and a background soundtrack of non-musical sound loops. In contrast to Saba’s song which sweeps away all worry and bathes the listener in a sonic world of soothing clarity, Ziad Moukarzel answers with the fuss-pot bleepy-bloopy instrumental “Questions of Worry”, filling up the mind with sparkle-toned trills and demented little mini-melodies. Equally crazed and loopy – literally so, as half the track consists of a continuous loop of watery-toned scraping noises overlaid by various noise effects and field recordings – is Joseph Doumet’s “Collage 1”. Bringing up the rear and closing the main compilation is Sharif Sehnaoui and Charles Cohen’s “Cut 1”, a lively and fun-filled collage of noise and sound effects, and various attempts at scrabbling on an acoustic guitar.

The nine bonus tracks are led by Elieh’s “It’s good to die every now and then (part 4)” which this time is a throbbing slow burner that brings to the fore the sizzling, quivering edges of the drones and the bristling noises, anticipating an explosion that may never come. The majority of the bonus tracks come from artists already featured on the main compilation, like Two or the Dragon who offers up the boisterously noisy light-industrial “Addiction to Heartache”, again featuring sonorous singing and chanting vocals over clanging machine noises. Fadi Tabbal, who has an earlier mood piece on the main album, brings along an intensely melancholy and brooding instrumental “Music for Arcs and Diameters”, one of the weepiest and most spacious tracks I’ve ever heard. Youmna Saba charges up and down wooden stairs and turns on an industrial muttering, puttering machine drone so she can launch into another beautiful Arabic-language torch song with her melodious oud. All the while that drone is quietly working away. After Saba steps away, we get more exercises in instrumental noise electronics, some of them as bat-shit crazy and extreme as can be, in Tres Milliones Dolares’ “Jon Black”, and in the sleeker, brittle-sounding jittery glitch electronics of a piece by a trio of musicians led by Sharif Sehnaoui. Doumet’s “Collage 2” finishes off this trio with jagged and jumpy cut-ups of noise loops and found sound recordings. Generally this bonus set is good but compared to the original anthology it seems a bit less varied and most additional tracks by artists who have works on the compilation proper do not add anything new or different.

While not all tracks may be worth sitting through, and some are saved more by their mischievous sense of adventure and extreme risk-taking that has them skating on a knife-sharp edge just above an abyss of noise chaos, than they are by their actual sounds, they are worth hearing out at least once as a collective illustration of a young, dynamic experimental music scene in an area isolated from the rest of the world by geopolitical issues and Western ignorance about or prejudice towards Lebanon and things Lebanese. I’m beginning to warm to Unexplained Sounds Group as my new favourite experimental music label.