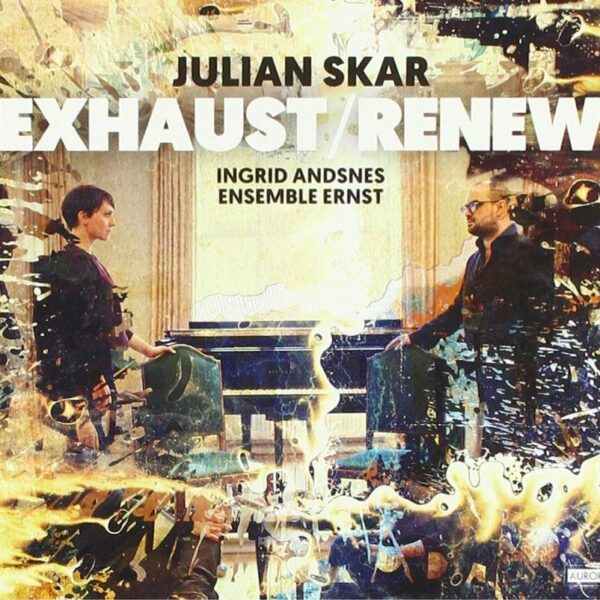 We first noted Norwegian composer Julian Skar when his apparitional ‘typewriter’ frenzy ‘Kunsten Å Tvile 2’ put the manic finishing touches to the magnificent debut by Ensemble neoN – a ‘cross-genre’ outfit he had set up, and which scooped up a ‘Norwegian Grammy’ in 2016 with said CD, not to mention Ed Pinsent’s praise for ‘confidence, enthusiasm and boldness of the playing’. The preponderance of such accolades may go some way to explaining the ensemble’s putative value within popular and ‘high art’ worlds, especially as it is less obviously eclectic of musical appetite than groups like the Kronos Quartet.

Skar has been busy in the interim and his own debut, Exhaust / Renew, is why. Consisting of four iterations of the title piece for incrementally expanding line ups, from solo piano (Ingrid Andsnes) to piano and sinfonietta (Ensemble Ernst), it painstakingly connects the poles of writing and improvising (and a number of others besides) within those arrangements. The first lies within the title itself: of death and rebirth enacted throughout by the piece’s division into hurried piano passages separated by pregnant silences and delimited not by score, but by a lifespan seemingly reliant upon the energies of the improvising performer. While largely more restrained than Skar’s previous work, the neoN resemblance is acute, particularly in the way the passages syncopate deftly around brief phrases with the urgency of a frenzied dial through all the possibilities of a combination lock.

Within this interpretative freeplay – and in the mood swings from one section to the next – lies the emotional ‘spontaneity’ that the liner notes place at the heart of this commanding music, though the claim is simultaneously splattered by their reliance upon one unqualified intellectualisation after another to argue the case, using specious dichotomies like ‘spontaneous’ art vs. ‘normative’ therapy (as if therapists were all in the pocket of the government) to orient music that knows no cardinal directions. The beauty is in the blur of identity, not the naming. However, the beauty of liner notes is that you can ignore them. The same cannot be said, however, for this sophisticated, multi-polar composition.