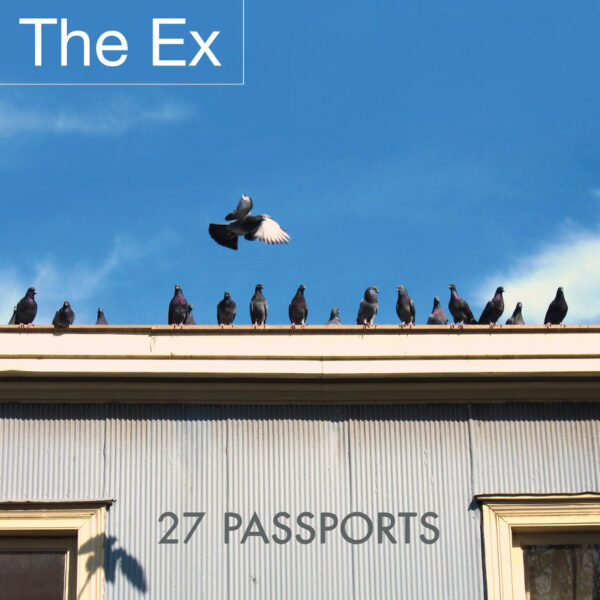 The co-ordinates of Netherlanders The Ex always seemed to be found at the intersection of Crass and Sonic Youth. The fiery independence/manning the barricades mentality of the former meeting the avant guitar thuggist tendencies of the latter. However, while the first comparison still holds plenty of water, the devil-may-care spirit where wayward tunings and screwdrivers jammed between neck and string of Thurston and company were worked out of their collective system many moons ago. Meanwhile, The Ex’s near hyperactivity continued unabated. In the last eight years for example, interspersed between numerous gigs/festival appearances there’s been a pair of elpees with ‘Ethiopian Legend’ Getachew Mekuria, a number of split singles with like-minded coves and one improv platter with Brass Unbound (with Messrs Vandermark (K) and Gustafsson (M).

And now, following on from 2010’s studio album Catch my Shoe comes 27 Passports. Like its leather-uppered predecessor, the bass guitar slot still remains vacant. The six-string threesome of Andy Moor, Terie Hessels and Arnold de Boer compensate magnificently with the rumbling bottom end substituted by a fully interlocking mesh of noise fug, dischordancy and glorious Fallesque repetition (ah!). When faced with a prospect such as this, most batteurs around town would’ve gone for the power over sublety option, but Katherina Bornefeld’s rolling ‘n’ tumbling drumwerk comes as a breath of fresh air and a touch or two of the Mitch Mitchells can only be a good thing, right? With 27‘s opening broadside, “Soon all cities”, the group takes it in turns to wear the trout mask. That lolloping, shifting Beefheartian rhythm underpinning an urgent missive concerning the homogenization of your (and everyone else’s) back yard. “Soon all cities will have the same restaurants…roundabouts…governments…accidents…” warns voxist Arnold de Boer. Heartfelt for certain, but it’s a message delivered a little too late for most of us in the west.

“The Heart Conductor” and “Birth” have sparkling, and attractive top end guitar signatures that leave a distinctive African aftertaste while the stunning “Four Million Tulip Bulbs” details a historical phenomenon that originated a whole lot closer to home. Cross-referencing past events with modern everyman experience being a major facet of all things Ex. It’s a number that compares info about the Netherlands’ ‘Tulip Mania’ of the mid-seventeenth century (where newly introduced tulip bulbs achieved stratospheric prices) with the vocalist’s brief assembly-line helljob in a vast tulip warehouse. A closing line like “It’s the worst job I have ever had!!” taking on the same desperate edge as the halo of electricity surrounding it…

After umpteen releases plus, these father figures to all Dutch agit-propsters (Grrr, Trespassers W, Eton Crop, De Kift, etc etc) come out of the other end with yet another dreadnought that’s seemingly impervious to goofs and pratfalls… just what is The Ex’s secret??