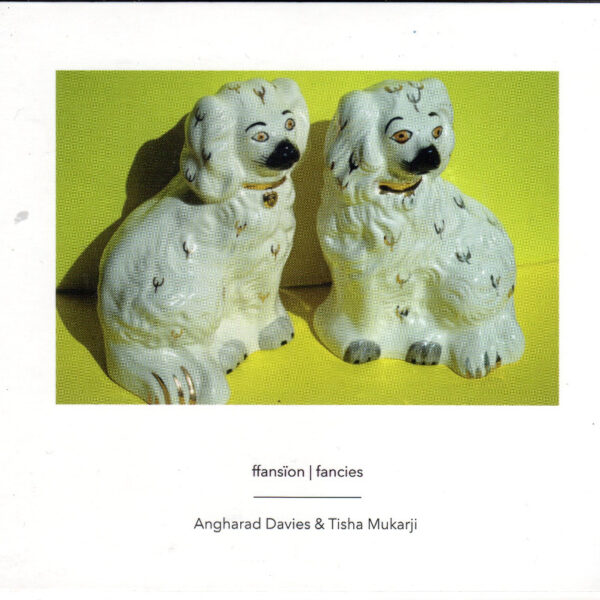 Ffansïon / Fancies (ANOTHER TIMBRE at99) is a superlative recording of some exceptional performances by Angharad Davies and Tisha Mukarji. Highest recommendation for this exemplary document of contemporary improvised music. Tisha has a degree in Fine Art from Malmo and seems to be active in the visual arts as well as music, and is a performing member of Schall Und Rausch with Kai Fagaschinksi and Axel Dörner. Violinist Angharad Davies should be known to most of you I hope. She has pursued her own pathway with this instrument and is now doing things with it that you wouldn’t have thought possible. It’s mostly about the taut, brittle sound; it seems to have become more refined over the years; more precise, sharper, surgical even.

As a duo these two made Endspace for the Another Timbre label in 2007, and that appears to be the last time they worked as a duo; we never heard Endspace, but indications are that it’s quite a different release and Angharad points out that “personally I am in a very different place musically to where I was almost 10 years ago.” They also made Outwash in 2012 with the Greek player Dimitra Lazaridou-Chatzigoga; plus there’s Unbalanced In (Unbalanced Out), which seems to be more of a conventional EAI thing with electronics and an all-star lineup from 2012 – one single 47 min piece…I think I personally prefer this simple violin and piano setup, there’s something very direct and clean about the whole thing.

A few scattered phrases pop into my decayed cerebellum as I scribble; very clean tones, very precise playing (esp. the violin). Many moods / styles / emotions. Some drone, some meditative, some slightly discordant in style of 20th century avant-garde composition (Morton Feldman, but also Tony Conrad; Angharad makes that bowing hero sound positively heavy-handed with her light touch). Honesty / concentration / music that stays in same place, explores particular avenues until the end. Nothing hidden. Simplicity of ideas and clarity of execution. Accessibility. If any of these are qualities that strike you as positive, as forces that might advance the cause of our music, by making it into something that actually touches your life rather than simply provide intellectual stimulation for clever people…then by all means investigate this record.

By way of comparison there are (probably) many groups or players who have too many ideas and too much technique and want to show off (to themselves, to the other musicians), and end up making music that is too convoluted. Not here. Two observations, taking cues noted from interview with Angharad at the Another Timbre website; the location was St Catherine’s Church in Hatcham and the acoustics of the building naturally contributed, but as with the best players you find that they make the space into an additional performer, they play to it and not against it, they bring the space to life…the other observation is to do with lasting friendship / trust between the two, which I suppose is the human essence that is the real bedrock of music like this; as Angharad puts it, it’s about “mutual respect for personal growth” and “you can equally just pick up where you left off.” How many of us can say that about our own friends? This is communication at a micro-level, deep, lasting, rare. From 6th March 2018.