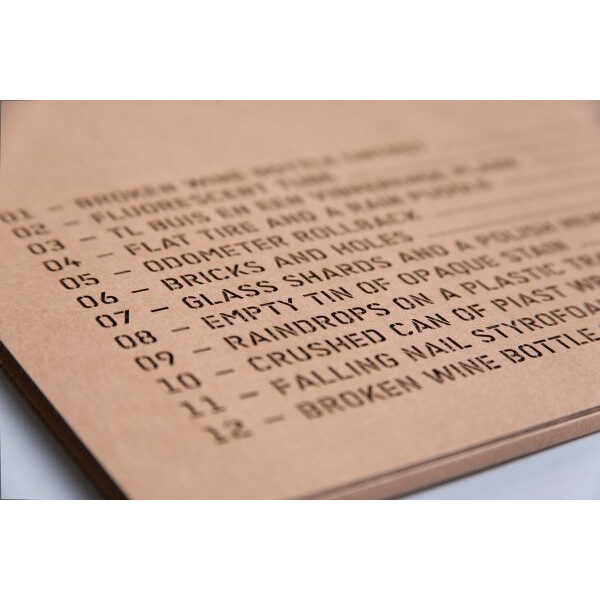 Werner Urban has released some “library” materials of dubstep rhythms and beats on the AV Music and Soundiva labels, but Dworzec Towarowy seems to be more of an experimental art statement. It’s released as a vinyl LP in a cover with stencil letters and numbers laser-cut into the outer sleeve. When he visited Poland with Lilian van Rooji, who is a photographer, he played pieces of junk found in an abandoned railway freight station outside Wrocklaw, and from these recordings produced this rather ordinary album of beats, percussion, and low-key electronics.

Lots of edits and varispeeds were evidently used to do this, assembling and recasting inert sounds into something with musical tones and patterns for pulsations and beats. The track titles refer to the physical objects used to create the sounds: for instance, ‘Broken Wine Bottle’, ‘Bricks And Holes’, ‘Flat Tire and a Rain Puddle’, and ‘Falling Nail Styrofoam Bottle Rack’. These suggest that Urban may at least have some interest in substantially different materials (glass, masonry, rubber, metal, water), and the different sounds they make, yet what ends up on the disc is all the same over-processed noise, with no discernible variations.

The fanciful sleeve notes by Dennis L’Ami try to make out this banal process art to be something more than it is; “a certain machine…reincarnates to play a role it was never cut out for,” is his assessment. Further, likening Durand to a visual artist or novelist, the claim is that he “creates protagonists out of a rusty nail or a broken fluorescent tube, while reinstating their functionality beyond the present time.” Pah! Composers, improvisers, sound artists and other musicians have been repurposing commonplace objects for a very long time now, and in far more imaginative ways than this; Durand contributes little advance to the practice, and the end result on this record is little more than minimal techno. Well, I kind of like the subdued voices of Werner and his girlfriend which have ended up on the tape, and could be read as a low-key miniature version of a rapper or toaster punctuating the tracks, but I’m being generous. Dworzec Towarowy might have made a decent four track EP, but a whole LP is overkill. From 20 February 2017.