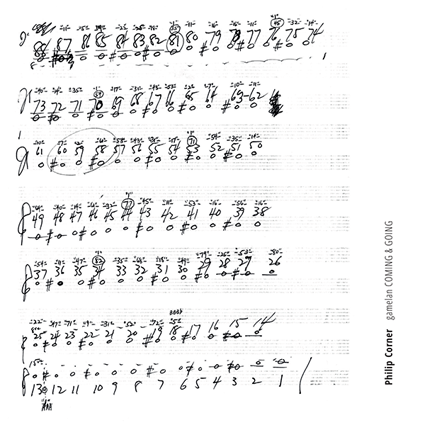 Philip Corner
gamelan COMING & GOING
ITALY ANTS RECORDS AG16 CD (2018)
Fluxus stalwart and pioneering pianist Philip Corner has been filling the racks lately – I count two reviews in the latest issue of The Wire, neither of which is for this splendid release, nor its sublime 36-minute title piece, gamelan COMING & GOING (1983). That said, there’s no gamelan to be found here either. Instead of the stately chiming of traditional Indonesian orchestra we hear Corner and ‘favourite student’ Evan Schwartzman counting aloud from 1 to 88 (i.e. the number of keys on a piano) and back, simultaneously in both directions; the numbers fusing into alien figures while an actual piano repeats the feat chromatically. The two directions criss-cross like lines on graph paper; that on which Corner sketched and annotated this composition in fact. Yet while the numbers march on, the notes linger like ghosts on faded filmstock and from somewhere within this musical koan emerges the magic we experienced at first hearing Steve Reich’s early tape experiments. While happy to mystify, Corner explains plainly that this arrangement acts as placeholder for the piece’s eventual realisation on gamelan: the listener is thus free to imagine what this might sound like. John Krausbauer
Beats
ITALY ANTS RECORDS AG17 CD (2018)
Entirely beat-free, except perhaps at microscopic level where modulating ‘multiple pattern-variations in a closely tuned VHF range produce a dynamic field of beating patterns, difference tones, acoustic phenomena, and inner ear/auditory hallucination’ as the notes catchily put it, is this exemplary 26-minute exercise in trance-inducing irony or ‘trance psychedelia’ as composer John Krausbauer terms it. While said to recall the ‘beats’ of maestro Pietro Grossi’s Battimenti (1965), it may correspond to the monochrome wave forms on the front cover, but convincingly joins the dots between capital-M Minimalism and its stepchildren in the quasi-techno realms. Had I not found the notes, I’d have assumed it the child of all-nighter with an oscillator or some such, but Krausbauer’s sparing recipe calls for just 3 accordians, which is more than my tired brain can take right now. Still, it’s about as intoxicating a high-low art boundary blur as can be obtained with such ingredients. Livebatts!
Livebatts!
ITALY ANTS RECORDS AG18 CD (2018)
Recorded late ‘90s but only recently readied, this delirious release’s 2-decade delay shows presence of mind, given that era’s surfeit of arch, plunderphonic antics. Instead of being lost in the pile, LIVEBATTS! has awaited its own hour. Bananas beyond the usual ANTS label standards, this eclectic self-titled could be a compilation, a lost Stock, Hausen & Walkman record, or both, with its hailstorm of voice samples, improvisations and passion for ‘cheap battery driven keyboards’ of the ‘80s (notably, the Yamaha DX-100) to ignite an impish ‘cheesy listening’ energy in the room. This trio formed the group’s second iteration, the common denominator of which was John White – erstwhile collaborator of Cornelius Cardew, the Scratch Orchestra etc. His taste spans Cardew’s graphic scores and systems-based composition to ‘heavily rehearsed’ improvisations and battery-drive synthesisers. Completing his battery of tasty toy keyboards are plunderphonic devil Andrea Rocca and vocalist Jiggs Coldiron, providing ‘karaoke’ backgrounds like the luscious throb of single-pick ‘Adventures in Outer Space’, over which Coldiron drapes her vocoderings. Such settings of wonky arpeggiation and menacing ooze, offer kitchen-sink inclusivity for whatever sounds show up to the party or explode in all directions. The sessions must have been fun – like watching Gremlins cook the Christmas dinner 1.