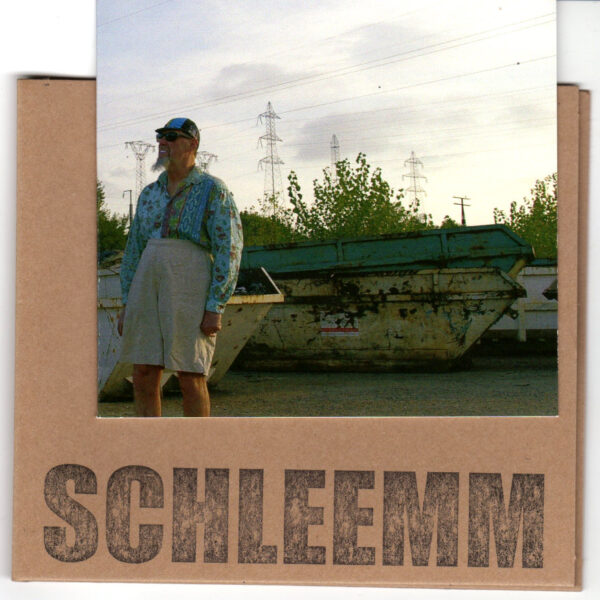 The Schleemm (ÉDITIONS VIBRISSE iiss05) item is the latest freakeroonie to be sent our way from the sweaty paws of Sebastien Borgo, the man behind various sonic abominations on labels such as Doubtful Sounds, Editions Vibrisse and Komma Null. Schleem, appearing here as Lucien Schléèmm and Mister Schléèmm, happens to be one of the four members who make up Micro_Penis (Borgo is another), whose nightmarish records have been causing nuits blanches in the house of Sound Proj for many years now. Of course Schleem appears there under his real name of François Heyer, not that that’s much of a comfort under the circumstances. Confused so far? Well, the name-changing strategy is profoundly effective; just ask Xentos Jones, who may or may not be Jim Welton as well as L. Voag and Amos from Amos and Sarah. Indeed the parallels between these Ogrob projects and those incredibly strange post-punk records from the It’s War Boys label is something we really must consider and discuss in more depth some time. I have glimpsed a recent documentary film by Luke Fowler which purports to document something of the many lives of Xentos and related players, but it conceals as much as it reveals. According to one account, Welton would change his name in the course of a single 20-minute conversation with you, as well as giving out other misinformation; an extremely effective tactic for keeping your pursuers at bay. For some, maybe it’s the best way to keep their art alive and uncaptured.

Back to today’s record. It seems to be divided in two halves, five tracks under the heading ‘Der Elektroniker’ and a further six labelled as ‘Chanteur de Charme’. Electronic music, followed by songs; of course he uses his voice on the electronic tracks, and plenty of synths and beatboxes on the song tracks, but I get the general idea. The electronic half of the entertainment is deliciously strange, chilling synth instrumentals and unearthly melodies performed with an icy deliberation. You might almost mistake them for marginal examples of minimal cold-synth wave or atmospheric dungeon Black Metal, but they’re too individualistic to fit comfortably in any genre. Stark, daring gaps are everywhere; chasms of dynamic silences. The choice of instrumentation is highly odd, with recorders, single drums and voices joining the weird synth sounds. The “horn” keyboard setting – or perhaps an actual hunting horn – is used more than once, stirring further feelings of desolation one would prefer to leave at home. In just 20 minutes, the staunchest of listeners will be perturbed and unsettled by this eccentric yet highly convincing music. One of the most effective – I don’t yet call it a “favourite” – is called simply ‘Splook’, and resembles backwards tapes rushing through the fourth dimension at speed, while the singer burbles spastic gibberish with a frightening urgency. On top of it, the solemn horns blast, as if announcing the appearance of St Michael about to do battle with Satan. 3 mins and 30 secs of unsurpassable grotesquerie from the forbidden reaches of the brain.

The “song” cuts lumber even further into the realms of the ugly and the preposterous, most of them carrying a certain air of goonery that could brand the song as a complete joke, or the product of a lunatic disposition. They’re certainly sufficient to drive this listener to the Halls of Bedlam…luckily my old straitjacket still fits me. Against minimal synth structures, keyboard tunes plucked out with the heavy-handed conviction of a fellow who writes letters in green ink and underlines every other word, Schleemm sings or speaks his incomprehensible messages with the same authority I imagine an Outsider artist like Adolf Wolfli would have possessed in everyday conversation. ‘Hair Brushing’, for instance, which might be a song about attending to one’s coiffure, is performed with manic repetitions and a horrible sense of urgency that will shortly convince you that this most mundane of daily activities is both the most important and the most dangerous thing that a human being could undertake. And ‘Schwartz ist die nacht’ is a bleak monster, featuring one of the best synth tunes that was ever left off a Residents LP (Mark Of The Mole era), and sung in a wretched voice which growls with the embittered passion of one who has just failed the audition for joining a Doom Metal band, on ground of being too “throaty”. That’s just two of six twisted delights that await the curious; you were warned.

One of the few contemporaries I can think of who approaches this high degree of dementia would be Kommissar Hjuler, but even he sounds mannered and “arty” compared to the raw vitality of this record. This unprocessed quality is what endears me to many of these Borgo related projects, even if they seem like marginal outliers and the surface may be incredibly repellent; you get a fierce honesty and truth that is hard to find in today’s world of over-mulched culture. If you too are fed up of pabulum, check in here for four pounds of fresh red meat. From 23rd April 2018.