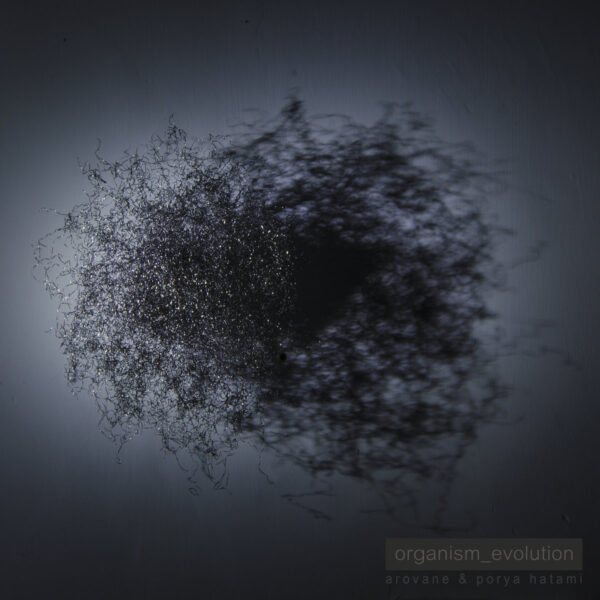 Organism_evolution (KARL RECORDS KR015) is a quite nice set of electronic textures and sounds, generated using many processing techniques; it’s a kind of fragmented ambient blanket, presented as 23 separate episodes. The conceit of its creators, Arovane from Germany and Porya Hatami from Iran, is to identify each track as some form of living microscopic creatures, wriggling under the microscope. 300 copies of the 2xCD set were available. (23/04/2018) More hyper-modern Japanese synth-pop from Serph on his Aerialist (NOBLE NBL-224) CD; full of layered cross-rhythms and snappy beats apparently influenced by Jungle and drum’n’bass genres. Serph is still wedded to melodies though, and layers up his saccharine tunes performed to a near-impossible degree of perfection by clean white synths stacked up in banks, or by a “romantic” piano setting that is intended to induce some form of nostalgia. Energetic to the point of breathless, but has a sort of hard-edged plastic beauty to it. (23/04/2018)

Banburismus (SOUND ON PROBATION SOP 018) is the latest from French composer Laurent Perrier, here operating under his Zonk’t guise, the cloak he dons when he wishes to experiment with dub-inflected ambient music. The A side of this LP is fairly astonishing; a dense and seething drone goes through any number of filtered transformations, is dragged backwards through time by gibberish speeded-up voices, before turning into a very satisfying ultra-modern dub piece, with bass throbs, beats and peeps that are like King Tubby refracted through a digital kaleidoscope compositor device. The theme of the record refers to the code-breaking work of Alan Turing, indicating Zonk’t is yet another who has succumbed to the joys of wartime paranoia as a conceptual underpinning to his work. (23/04/2018) At The Still Point Of The Turning World (ROOM 40 RM492) is by two contemporary Portuguese composers, Joana Gama and Luís Fernandez. They’re taking a cue from the poetry of T.S. Eliot and aim to make a statement about “the nature of time”. The musicians on the record are directed to play long tones, punctuated by very crisp piano stabs and percussion attacks, sometimes interrupting the flow with urgent fiddling from the string section. It’s nice the way that instruments stand out very distinctly from these abstract backdrops. Further, each piece is a clash of at least three different speeds; while some elements stand still in contemplative fashion, others rush past at an alarming rate. All of this deepens the intrigue of the album. (23/04/2018) Extremes of emotion and extremes of sound are meat and drink to Thembi Soddell, the Australian installation artist and electroacoustic composer. She’s been researching mental illness and psychological disturbance in an academic setting for about eight years now. Her Love Songs (ROOM 40 RM491) has a somewhat ironic title; she’s more interested in the depths of uncertainty and anguish that can result from flawed human relationships. To better explore this theme, she enlisted the talents of vocalist Alice Hui-Sheng Chang to provide some raw material she could transform with her electro-acoustic processes. The result is five disturbing droners that pull the listener into a vortex of difficult emotional states, while still remaining a compelling listen. “Intense”, “dark” and “raw” are but some of the keywords that characterise this strong yet subtle music. (23/04/2018)