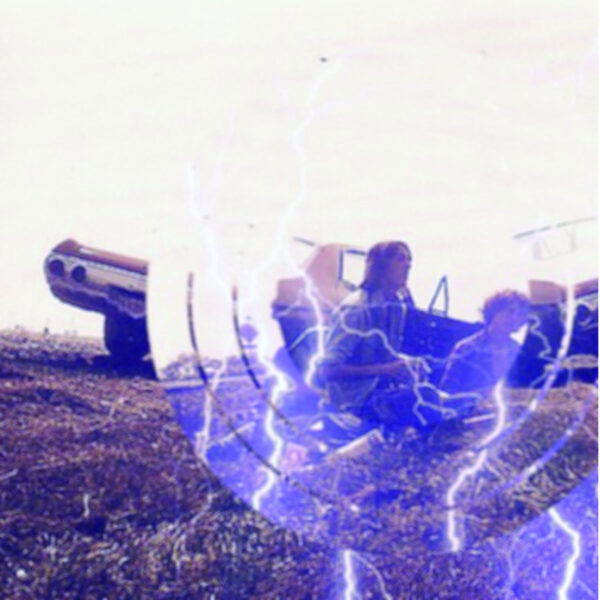 Fine release from LF Records is Rash Chemistry (LF 061), created by a New Zealand duo Sean O’Reilly and Alan Holt. It’s got at least two of its eighteen tentacles planted in the “free rock” marshlands, and it’s performed with an amplified electric guitar (Sean) and a synth (the Holtster), with plenty of amplifier hum and twiddling string-bending moments from the Reilly-beast, and plaintive mews issuing from what I hope is a silver box held together with gaffer tape from Alan, the Circuit Attacker. That’s his synth I’m describing there (and hopefully it also spits out blue sparks at random moments) but he also has a drum machine, which he must wield in strange ways that generate peculiar non-drumlike noises much like we used to hear on those abrasive Yellow Swans records.

With this set up, thick oozy gloop and textured blankets of pulp pour forth slowly from their deformed orifices. Apparently these guys are veteran scenesters going back years; you and I need to look into the history of their other bands, such as King Loser (two LPs on Flying Nun in the 1990s), Sferic Experiment (one cassette on Xpressway in 1989) and White Saucer, who were sporadically published by Freedom From, Nervura, and other tiny labels. It’s something of a truism to characterise New Zealand music as “extremely droney”, but when I hear Pumice and Sandoz Lab Technicians what I also hear is near-tropical heat and light somehow encoded in the bones of the sound itself; it’s soggy with sweat, humidity and rainforest vapours. All of these are good qualities which likewise surface to some degree on the two long workouts on Rash Chemistry, but the music is also occluded by stains of darkness, melancholy, alienation even…there’s a tinge of bitterness underpinning even the most apparently insouciant moments.

Of the two long tracks here (it would make a great vinyl LP) ‘Orphans of the Sky’ is the more melodic and wistful as it ponders man’s journey by staring at the great clouds overhead. The title track ‘Rash Chemistry’ is one for the wrestling fans, and will satisfy your lust for abstract thick noise-o grind delivered remorselessly to the forehead with wooden paddles. Can’t stress enough how much I enjoy the playing here; though there is distortion, they’re not letting the boxes do the work and every moment of this racket is solid, hand-crafted, premium quality glorp. Stands out as an unusual “performed” record with actual instruments, compared to the noise / process art / computer music that LF Records often deals in. I always tell myself I must “investigate” more New Zealand underground music, and feel more motivated now (especially since I’m re-reading old record reviews in Forced Exposure lately). From 2nd May 2018.