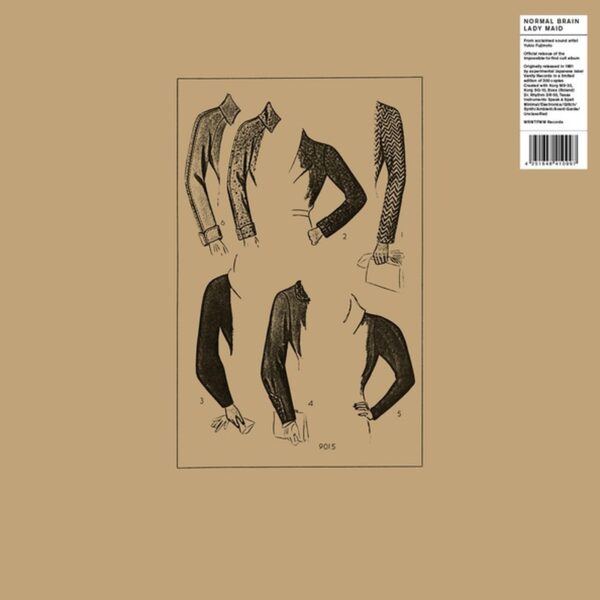 Normal Brain, Lady Maid, We Release Whatever The Fuck We Want, WRWTFWW029 LP / CD (to be reissued March 2019)

Just recently I heard that this recording, the only one ever released by the Japanese minimalist electronic group Normal Brain, led by Yukio Fujimoto, way back in 1981, is going to be reissued on both vinyl and CD by the unforgettably named We Release Whatever The Fuck We Want label in another month. Originally issued in a limited vinyl pressing of 300 copies on the experimental label Vanity Records, the album is representative of the early 1980s burst of experimental electronic pop music creativity in many countries around the world thanks to the invention and mass manufacture of affordable and even portable electronic music instruments that enabled musicians to explore and record interesting sounds at home, free from label and studio time pressures. The instruments featured on this recording include a Korg-MS20 synthesiser, a Korg-SQ10 analog sequencer and a Texas Instruments Speak and Spell handheld toy computer with keyboard and speech synthesiser.

The album divides into two very distinct sides, Side A consisting of five very playful minimalist pop avant-garde electronic ditties, of which some (“M-U-S-I-C”, “You Are Busy, I Am Easy”) feature the Speak and Spell toy synthesiser voice on “vocals”. The first track “M-U-S-I-C” sounds a bit like a sly dig at “Computer World”-era Kraftwerk both in the style of music and general minimalist melodic approach. The humour can be very knowing and mischievous. Tracks have a very lo-fi feel, sounding a little like archaeological relics from another age of long-forgotten electronic music. Distinctive pop rhythms, reminiscent of 1960s space-age lounge, are a major distinguishing feature of tracks like “Thrift”. Of the songs on this part of the album, the instrumental pieces like “Thrift” and “Tomorrow Never Knows” are the most inventive with layers of arch rhythm, effects, strange noises and a weird, almost surreal atmosphere.

Side B is an altogether different beast, consisting of just the one track “Mist” and this is a mysterious cinematic sci-fi droning soundtrack piece, startlingly dark and sombre in contrast to the happy, carefree music that came before. A completely different spirit, not a little ominous and filled with the immense scale of the universe, inhabits this track.

For an album of music made on first-generation mass-produced consumer electronics musical instruments and toy computer, the tracks here can be stunning in their mood, humour and atmospheric complexity. Nothing sounds flat or cheesy-mechanical in the way some experimental electronic pop recordings I have heard, past and present, can be. In spite of the long passage of time, not much in the music sounds dated or kitsch. Yes, the folks at WRWTFWW are right that this recording is long due for its place in the sun again … you go, guys!