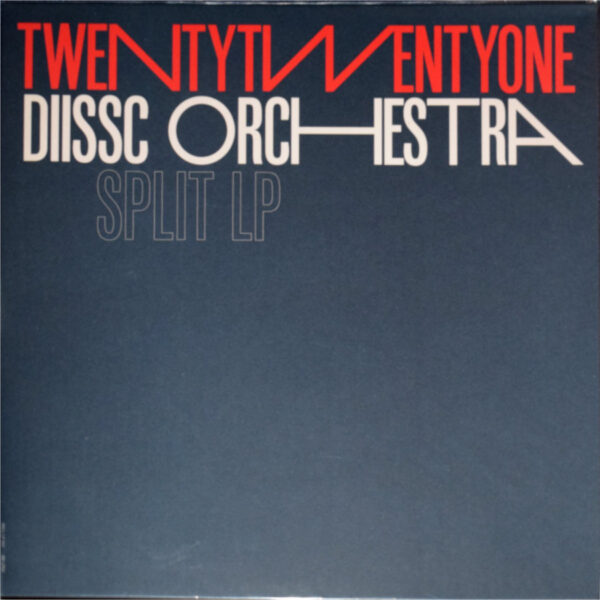 Another missive from the Music Information Centre Lithuania, which is doing much to advance the cause of contemporary Lithuanian experimental music with its publication programme. While there have been a number of CDs and compilations, the Split LP (MICL LP 001) might be its first release on vinyl. Certainly the liner notes, penned by Dariusz Brzostek, do much to remind us of that fact and even attempt to tie his pretentious musings about the physicality of vinyl to the music in the grooves. Two combos are represented. TwentyTwentyOne is a four-piece, featuring Lina Lapelyte, Antanas Dombrovskij, Arturas Bumšteinas and Vilius Siaulys. On the B side, another foursome calling themselves the Diissc Orchestra; they are Martynas Bialobzeskis, Antanas Jasenka, Vyautas V. Jurgutis and Jonas Jurkunas. I think only Bumšteinas is familiar to us, and we’ve often enjoyed his ingenious conceptual games in music.

On their Treatise Trampoline, TwentyTwentyOne attempt their realisation of the famed graphic score Treatise created by Cornelius Cardew in the 1960s. At any rate, they do so rather selectively; only some of the pages were used (can’t blame them there; it’s 193 pages long), and they used it as a “co-ordination device” rather than an interpretation. They’re mostly a laptop group, but also play musical instruments; not really clear if they did so on this occasion. What emerges is a very disconnected jumble of samples and sounds; running water, brief fragments of musical interludes, and other unidentifiable elements are vaguely suspended in a lukewarm soup of every-day electronica, one thing following another with no internal logic. This may reflect the way it was made; they each worked on their segments in private, before putting everything together in the studio. Random-ness works its way to the top of the agenda; some might say this is being true to the spirit of Cardew’s work, which was at the time influenced by John Cage and his ideas about indeterminacy. But on this LP the ideas don’t gain any traction, there are no real surprises or explosive moments in the semi-chaotic murmurings, and there is little coherence or progression to the final assemblage. “The text of Treatise is so ambiguous that, in fact, it is open to any reading,” asserts Brzostek blithely, thereby letting this half-baked work off the hook.

Sadly I fared no better with the Diissc Orchestra. These four players have been doing it for ten years now and have an intriguing set-up, involving multiple disc players and “low-tech” devices, and make use of stopwatches in their performances; they also use graphical scores, which might be their point of intersection with the Treatise side. Their four pieces seem to be mutual remixes of each other’s works, though after reading the notes I’m even less sure that this is the case; we’re being invited to read this as some sort of meta-music, a comment on the manipulation of physical materials, producing something open to multiple interpretations. This notion too comes from Brzostek, who’s evidently intent on becoming perceived as a 21st-century structuralist. All I can hear on the vinyl is very ordinary ambient and electronica, singularly lacking in ideas or boldness. While the first track has some aural interest – quite dense, speedy, and studded with textural blips – the remainder soon lapses into commonplace droning. A disappointing LP all round, falling far short of its intellectual ambitions. From 1 May 2018.