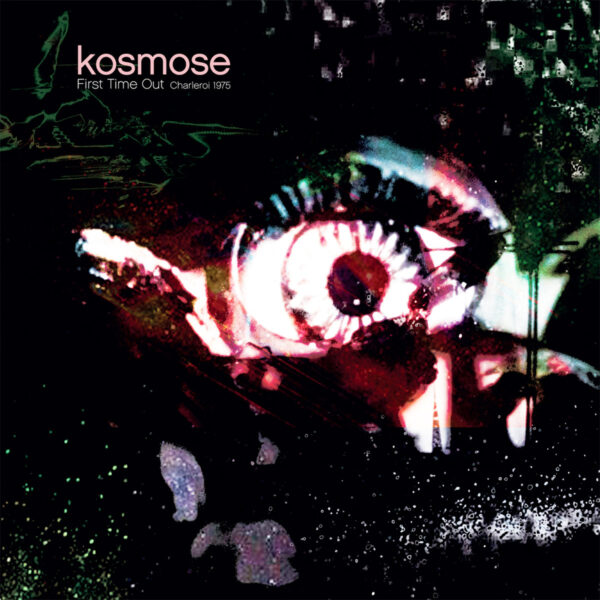 Even the most fervent disciple of (blech!) ‘Blue Sky Thinking’ must’ve thought that those eleven improvs on the trio’s Kosmic Music from the Black Country double set stripped the cupboard bare of archive material. As Belgium’s Kosmose only blinked into existence for a short period of time, any other recordings exhumed from the bowels of their chez nous must surely be thought of as an early Christmas and birthday present combined. Caught live at the old St. Joseph Chapel, Charleroi, during the winter of ’75, First Time Out documents the very first (and sadly last) concert of Kosmose Mk 1, which was captured in a bare-bones fashion using just two microphones and one reel-to-reel tape deck. Actually, the word ‘concert’ undersells things just a little as it would be more relevant to call this a ‘multi-media happening’ for ears, eyes and nose’ (!), as the group’s endeavours were supplemented by a lightshow, strobes and abstract slide projections, while the signature fragrance of burning incense caressed the nasal passages of band and audience alike. I think the U.K.’s Mark Boyle and Liquid Len missed a trick there!

After a speech slash poem in the finest Walloon by Andre Dedie Gaudtaubois, in which I’m sure I detected a mention of ‘pataphysics’ (?) (see also “Soft Machine II”), “The 13th Untitled Track” finds Alain Neffe’s mystical and seductive dance of the flute presaging guitarist Daniel Malempre’s showcase of extended ragaesque string heroics. “The 14th Untitled Track” operates from a sharper, more hard-edged mind set however, where fuzzed-out sonorities can manifest at the merest flick of a Bakelite switch. Following on from the exotic lure of the Indian Tarang and a rumbling bowed bass dis-concerto, the intensity levels nudge red with a wild ‘n’ wooly electronics salvo that, in part, easily pre-empts certain aspects of the industrial movement by a clear five years or so….

With its talk of ‘primitive rhythm boxes’ and ‘clumsy voices’, don’t let the sleeve notes charming self-deprecation slip you the red herring. This is a more than useful artefact for those interested in the building blocks that contributed to Alain Neffe and Co’s future projects: Bene Gesserit, Human Flesh and PseudoCode to name but a crucial three.